‘His heart is still beating; it’s beating for someone else’ 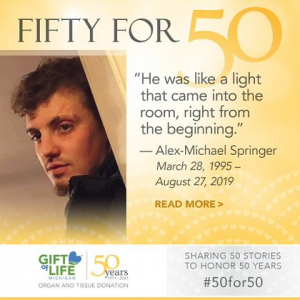 Alex-Michael Springer had his future ahead of him, and things were looking good. The 24-year-old Paw Paw resident was expecting a child and had just learned that he was being groomed for advancement at Trout Glass & Mirror in Valparaiso, IN – with the company agreeing to pay for his education.

Then tragedy struck. Alex-Michael was driving along 1-94 from Indiana to Paw Paw in August, 2019 and stopped in a construction zone when another driver rammed into his car from behind. Gravely injured, he was transported to a nearby hospital.

His mother, Mary Springer, said she knew it was bad, but still had hope that he would recover. She had reason to. Alex-Michael and his older brother, Skyler, were in an auto accident about 10 years earlier that injured both boys. Alex-Michael was thrown partially through the windshield and needed reconstructive surgery. His recovery led to issues with drugs and, ultimately, jail time for the once straight-A student. He fought through all those issues and turned his life around, his mother said.

“I kept thinking: ‘If there’s any kid that can do this, it’s this one. He’s tough as nails. He’s made it through hell. He’s straightened himself out. He had two-and-a-half years clean; he was healthy. He was doing great,’” Mary said.

Alex-Michael was in a coma for 17 days while his family prayed for him and the community rallied to help him and his girlfriend, Tierrah Adams. His daughter, Elizabeth, was born while he was comatose and was placed in his arms every day. Alex-Michael showed signs of recovery: his heartbeat stabilized, then his blood pressure and body temperature. He was still on a ventilator, but breathing 50-percent on his own.

“He fought,” Mary Springer said. “He fought like hell.” Doctors told her, however, that he would most likely never regain consciousness and, if he did, he would not be the person they knew. Mary said she told her son that it was up to him: she would be with him no matter what.

“I told him what was going on,” Mary said. “I said: ‘I joked with you as a kid that I brought you into the world and I could take you out, but I never thought I would ever have to make that decision. I know I can do it; I’m strong enough to know that you wouldn’t want to live like this. But you have to let me know you can do it, or let me know you can’t.”

Alex-Michael succumbed to his injuries and became an organ donor on Aug. 27, 2019.  He was able to donate both kidneys, along with his heart, liver and pancreas. His gifts saved five people.

“I miss him every single day, but I’m so proud of the decision that he made to be a donor,” said Mary. She said her strong faith helped her through that difficult time and reassures her that she will one day be reunited with him. “I know where he is and I know I’ll see him again. It’s just getting along without him that’s tough. It makes it a lot easier knowing that his gifts have given life to at least five people whose lives have been, if not saved, improved dramatically because of his choice to be a donor and I’m over the top proud of him.” 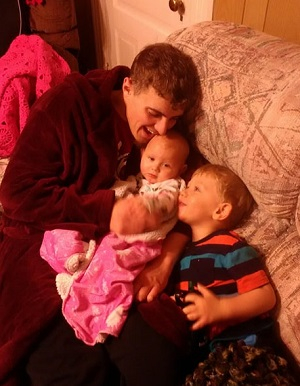 Mary has since corresponded with some of the recipients of Alex-Michael’s gifts. She has grown close to Margo, who received his heart, although they have not yet met in person due to the Covid-19 pandemic. Margo created some quilts for the Springer family during the lockdown and Mary, a stained glass artist, made her a stained glass heart with wings and the inscription: “God bless this beautiful heart.”

Mary knows that Pam, who received Alex-Michael’s liver, was able to watch her daughter get married. There’s a schoolteacher with one of Alex-Michael’s kidneys who is no longer on dialysis. She says it’s comforting knowing that her son lives on and has helped so many people.

“I know his heart is still beating; It’s beating for someone else,” Mary said. “It’s a thing that makes our family very proud and very happy. If we had to lose Alex, at least another family didn’t have to lose someone they loved.”

Gift of Life Michigan is celebrating its 50th anniversary in 2021 by honoring the stories of donors, donor families, recipients and volunteers. You can read more #50for50 stories here.