‘It changes the way you look at everything’ 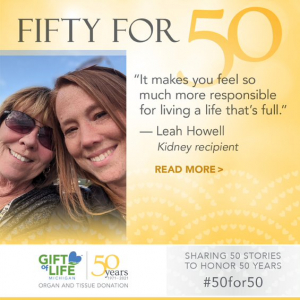 Leah Howell celebrates two birthdays on the same day every year. One is hers, the other is her donated kidney, which she received the day after her birthday more than 16 years ago. She named her ultimate gift “Joey.”

“I’m not really sure where the name came from,” she said.  “I think I was joking one day and referred to him by name. Ever since then, Joey gets birthday cards. He’s part of the family.”

Howell’s kidney issues came out of the blue when she was in the seventh grade. While walking the six blocks to the bus stop one day, a sudden pain in her back caused her to stop short and double over. By the end of that day she had visited the principal’s office, her doctor and finally a hospital, where she was treated with antibiotics. Her family and caregivers thought it was a fluke, but she experienced a similar episode a year later. It was treated the same way.

In 2001, when she was in her late 20s, Howell started to get really sick. She was constantly fatigued, she gained weight and she needed supplemental iron through an IV. Her doctors told her she would probably require dialysis “somewhere down the road.” Turns out, that was only a month later.

“It happened really quickly,” she said.

Howell was on dialysis for about 16 months before she got the call that a donor kidney had been gifted to her. At first, things looked good. The kidney was nearly a perfect match and she was discharged from the hospital just five days later. Two days after that, however, she developed blood clots and had to return to the hospital. The first transplant was not successful, and that meant another 13 months on the waiting list – and more dialysis treatments. She got the second call on her birthday and, a day later, met “Joey.”

Howell was able to return to school and complete her dream of earning a PhD in Developmental and Learning Sciences and now works as an executive coach in the Chicago area, helping people live full and happy lives. She has had other health challenges – a routine visit in 2015 resulted in an 87-day hospital stay, during which she was on a ventilator – but through it all, her ultimate gift has been, as she says “a trooper.”

Even 16 years later, Howell said she thinks about the family whose loved one provided the ultimate gift of life to her.

“As I’m celebrating my birthday every year, I’m also remembering that family is remembering the loss of someone that was an important part of their life,” she said. “While I’m grateful, it breaks my heart still that that has to be the situation. It is bittersweet in a lot of ways.

“It is the most overwhelming mix of emotions to process,” she added. “I have someone else’s organ in me. It makes you feel so much more responsible for living a life that is full and that gives back to others around you, and to live out the legacy of the donor.”

She has dedicated herself to giving back to the community. She’s participated in the Gift of Life Michigan Campus Challenge, both at Eastern Michigan University and Wayne State University. She’s volunteered at Donor Days with the Michigan Secretary of State, at speaking engagements on college campuses and with the Detroit Minority Organ Tissue Transplant Education Program (MOTTEP). She said she shares her experience because she wants young people to think about organ and tissue donation, too, and to help break down the myths and misconceptions about the process.

“I’ve been able to do so many things and it all goes back to somebody making a decision back in 2004 at the most difficult time in their life,” she said. “It changes the way you look at everything in the world when that happens. I think it makes you appreciate things more. It makes every single thing that much bigger.”

Gift of LIfe Michigan is celebrating its 50th anniversary in 2021. You can read more #50for50stories here.