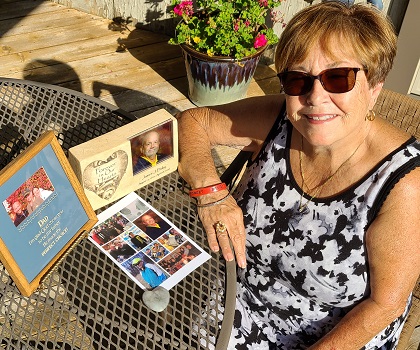 A lot of people called Jim Pixley ‘the Miracle Man,’ because of all the things he went through and everything he accomplished.

Pixley, of Highland Township, passed away on April 28, 2020 at the age of 76 – more than 31 years after a donated heart saved his life and gave him the opportunity to grow old with his wife, Carol, and see his children grow and prosper. Jim, a chemical engineer, was always a numbers guy and Carol said they kept track of the additional days his gift of life provided: 11, 520.

“We are so grateful for all the extra years we had,” Carol said. “We were able to enjoy life together.”

Jim was diagnosed with cardio myopathy in the late 1980s and started to investigate possible treatments on his own. He researched and then volunteered to take part in a three-year clinical medical study at the National Institute of Health to treat the condition with medication. He was determined not to let his condition slow him down.

“He was very positive,” Carol said. “We were very physically active. We played tennis, we rode bikes, we went camping and fishing. All his medical challenges didn’t get him down. He survived whatever he was handed, and he overcame a lot.

“He loved life,” she added. “He said he wasn’t going to live his life dying.”

By 1987, however, his health continued to decline. A heart transplant – exceptionally rare back then – was his only option. He matched a generous donor – an 18-year-old man – and received the gift on Oct. 13, 1988 at Henry Ford Hospital. His was 78th heart transplant performed there.

The Pixleys were so grateful for their miracle, they started to advocate for organ donation right away. Back then, hospital patients had to pay to have telephone or television service in their rooms. Jim and Carol put on fundraisers to help patients pay for those things, creating shirts emblazoned with the slogan: “Don’t take your organs to heaven, heaven knows we need them here.” Later, they would host bowl-a-thons and other events.

“We were really involved in trying to make people aware,” she said. “We tried to do what we could to help.”

Jim’s new heart allowed him to live a long, full life. He was a long-time engineer at Uniroyal, where he holds a patent for run-flat tires. He enjoyed music, and played the euphonium in the in Livingston County Community Band and the University of Michigan Alumni Band. He tutored fifth and sixth graders in brass instruments. He and Carol continued to stay active: traveling, camping, kayaking and cross-country skiing. He enjoyed working on their six-acre property with its extensive garden and apple trees. They watched their son, Jim, and daughter, Julie, get married and were able to spend time with their three granddaughters, Jillian, Hailey, and Kaitlyn, who are now 19, 18 and 17, respectively.

“He certainly enjoyed life to the fullest,” Carol said. “He was able to do all the things he wanted to do.  We got to see our children grow up, get married, have babies and enjoy the babies. We enjoyed our life together. I’m thankful for the things he was able to accomplish.”