'He just wanted to help' 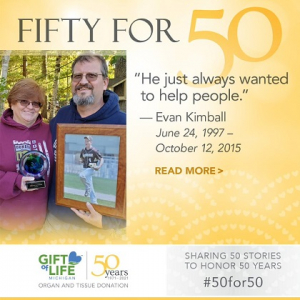 Gladwin, MI – Evan Kimball was passionate about helping others and playing baseball.

“He would play anywhere; he loved the game,” said his mother, Lydia.

He was, in fact, on his way back to Aquinas College one Saturday night in 2015 to meet with his teammates and prepare for practice the following day when tragedy struck. Evan nodded off behind the wheel and struck a tree. Subsequent attempts to save him were unsuccessful and he succumbed to his injuries two days later. He was only 18.

“What didn’t turn out to be the miracle we asked for blessed several families,” Lydia said.

Already registered as a donor, his gifts saved the lives of five people. Two others gained the gift of sight, and Evan’s donated tissue helped dozens more. Through their contacts with the Aquinas College team and community, they were able to pursue directed donation to four recipients, including George Magulak, who received Evan’s liver, and L.B. LaForce, who received Evan’s heart. The Kimballs are still in regular contact with the people whose lives were saved by Evan’s gifts.

Lydia and Ward Kimball said they wanted to expand even further on their son’s legacy. They’ve dedicated themselves to sharing his story, encouraging others to sign up as donors and giving back to the community. They established a golf outing in his name to raise funds for the community and to increase awareness about organ and tissue donation. The event, which took place for the sixth year in July with about 150 people taking part, has allowed them to donate to the high school theatrical troupe, sponsor little league baseball teams, provide funds for the Aquinas baseball team and establish a scholarship fund for well-rounded high school seniors. This August, they will sponsor a one-day food distribution to families in need in his name.

“It’s just for things that are geared to go back to the community,” Lydia said. “Evan always wanted to help. We’ll continue to honor him that way. We just want it to be something of the most benefit to the kids.”

The Kimballs also set a lofty goal of encouraging 4,444 people to sign up on the Michigan Organ Donor Registry in honor of Evan’s baseball jersey number, 44.

The Kimballs have been recognized by the Michigan Secretary of State as well as Gift of Life Michigan for their volunteer efforts. Lydia said it’s because they feel strongly about keeping Evan’s legacy alive and encouraging others to give back to their community and their neighbors.

“We encourage people to ‘pay it forward’ in whatever capacity they have to do that,” she said. “It doesn’t have to be spending money, just some type of kind gesture. It’s important to us. It’s really not about the numbers; it’s about the message.”

Gift of Life Michigan is celebrating its 50th anniversary in 2021 with 50 stories about donors, recipients, volunteers and staff. You can read more #50for50 stories here.