‘I didn’t even know it was possible.’ 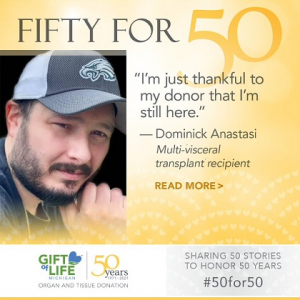 Dominick Anastasi is back to playing catch and coaching his sons in basketball, baseball and football. He’s grateful for the experience, considering a year ago, he was too weak to even throw a baseball.

Initially diagnosed with pancreatitis, the 40-year-old resident of Plainwell, MI, underwent several treatments, including having his gall bladder removed, but nothing seemed to fully solve his health issues.

“It got to the point where I was so sick, I was in the hospital more than I was at work,” he said.

Anastasi was eventually told that his surgeries and other complications had caused blood clots that severely damaged his liver. The organ wasn’t getting the blood it needed and he needed a liver transplant. As It turned out, it was not that simple. Because of his other underlying conditions, his care team told him he needed not one new organ, but five: a multi-visceral transplant that included his liver, pancreas and stomach along with his large and small intestine. It’s an extremely rare and complicated operation; only about 200 take place in the world in any given year. He was referred to the Indiana University Hospital for the procedure.

“I was stunned. It was the first time I had heard of a multi-visceral transplant,” Anastasi said. “I had no idea what it was. I didn’t even know it was possible.”

Fortunately for him, it was. He was placed on the organ waiting list in July of 2020 and received the gifted organs – all from a single donor – a month later.

He woke up grateful to be alive but saddened for a family he had never met.

“It hit me pretty hard. It hit me the day after. I was in tears,” he said. “They had to call the chaplain. Here I am, excited at having a second chance at life, but knowing at the same time that there was a family out there mourning the loss of their loved one.“

He has since corresponded with the donor family and shared pictures and said he hopes to meet them in person one day.

He has also continued to gain strength and spend more time with Crystal, his wife of 19 years, and their four boys: Dominick, Jr, Nikolas, Riley and Anthony.

“I’m starting to get some of my strength back,” he said. “It’s nice to be able to go out and play catch with my kids again. I was so desperately thin and fragile I couldn’t do these things before the transplant.”

There was one brief scare when his body showed signs of rejecting the large intestine – a serious concern, given that all organs in a multi-visceral transplant must come from the same donor. Had it not been successfully treated, Anastasi would have needed five new organs. Fortunately, doctors were able to get his healing back on track.

Anastasi said he’ll be forever grateful for his donor and he now looks at life with new appreciation. He advises everyone to do the same.

“Try to find the humor in things. There’s humor in everything,” he said. “Live your life. Don’t hesitate. It’s so easy to get angry or depressed. I just try to find the fun side of things. Just live every day like it’s your last.”

Gift of Life Michigan is celebrating its 50th anniversary with 50 stories of donors, donor families, recipients and volunteers. For more #50for50 stories, click here.