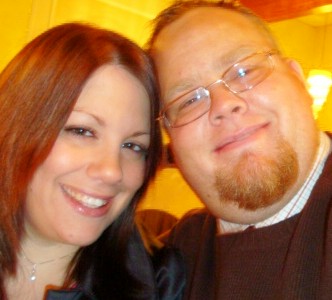 My husband is 32 years old. He was diagnosed with Chronic Kidney Disease two months after his mother passed away from the illness in April 2008.

At the time we were told that the disease could be slowed with diet and worst-case scenario years down the road he’d need a transplant. Years down the road occurred a lot sooner then we had hoped. In June 2010 it was time for Rex to start dialysis or find a living kidney donor to prevent dialysis.

He became weaker and weaker and by September doctors told us that something would have to be done. After a slew of tests – doctors at UM Hospital confirmed that his wife, Amy a healthy 26 years old with no family history of diabetes was compatible as a match! What great news.

I’m proud to say that on September 15, 2010 we went in for surgery. Although it has been only a week post transplant – I can’t believe the changes I am already seeing in my husband. He is finally feeling good. It brought me to tears when I saw him that first night.

The fluid is starting to reduce in his face and he finally looks happy and like himself again. This has already changed our lives. I would recommend everyone to sign up to be a donor. For a kidney donor – I would challenge everyone who can handle a few crappy weeks to save a life! It is so easy and we hold the answers! I am so thankful about the possibilities that lie ahead and to have my husband back.