50 Years of Honoring Life Through Donation

Since 1971, Gift of Life Michigan has led the nation in innovation and dedication to saving and healing lives. Here is our story. 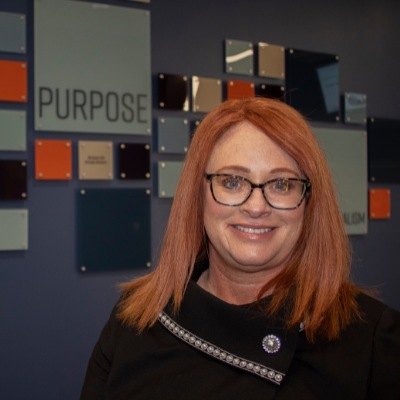 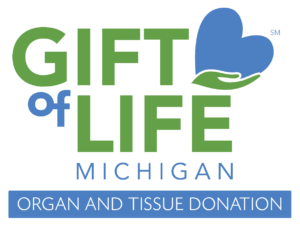 Fifty years certainly seems like a long time. It can be dizzying to think of all that has occurred, and how things have changed, since Gift of Life Michigan got its start back in 1971.

But that’s not the only way to think of time, as something linear, “from then to now.”

When I look at Gift of Life’s impact, I focus on the extra time given to recipients and their families this past half-century. We could measure that time in years but, more importantly, it is made up of moments like watching a child graduate from high school or college. Or being able to hold a grandchild or watch a loved one get married. Or having a family of your own.

We are not just talking about tens of thousands of extra years for the people we have touched, we are talking about lives renewed and lives well lived. And, in the case of our donors, legacies of generosity that will last forever.

That’s why at Gift of Life our core purpose is to honor life through donation. For 50 years, our commitment has been to support donors and their families, collaborate with our hospital and transplant partners, and get these precious gifts to the people who desperately need them.

This is, of course, something we could not do on our own. We have been successful through the years because of thousands of dedicated employees, our committed and innovative board members and our passionate partners in healthcare and the community. I thank you all.

As we move into Gift of Life’s next 50 years, our commitment remains and will grow even stronger. We will continue to mark our success not just with the passage of time, but with those special moments that mean so much to the people we serve.

I have spent almost all of my adult life in this field and the past 5+ years as CEO of Gift of Life Michigan. I cannot imagine doing anything more fulfilling. This mission is borne out of the selfless generosity of donors and their families, and it gives hope — and life — to those in need. Our work has gone on for 50 years, and I trust it will continue for another 50. Its impact will last for lifetimes.

In 1971, organ transplantation was a hit-or-miss affair, relying on word-of-mouth, personal contacts and a lot of luck for patients in need. Competition — not cooperation — was the order of the day.

Meeting at a restaurant in Brighton on Oct. 27, 1971, the surgeons, representing the medical schools at the University of Michigan, Michigan State University and Wayne State University, as well as Henry Ford Hospital, laid the foundation for what would become Gift of Life Michigan. Their plan was visionary: Put differences aside and create a statewide patient-centered system that allocated organs equitably among transplant centers and to those patients most in need.

“This was all before there were any national organizations involved in this,” said the late Dr. Jeremiah Turcotte, a surgeon at what was then the University of Michigan Hospital and one of the “Brighton Five.” “There was no association of OPOs. We were breaking new ground.”

The Transplantation Society of Michigan, as Gift of Life was first known, set up shop in Ann Arbor, hiring Gerda Lipcaman, a one-time National Kidney Foundation employee, as its first executive director and its sole employee. Initially, Gift of Life focused only on kidneys, before eventually facilitating transplants of other organs and tissues.

“It wasn’t all wine and roses when we started out,” said Dr. J.C. Rosenberg, another member of the founding five. “There was still a level of competition among us. We often had disagreements and difficulties, but we never developed any animosity toward one another.”

Lipcaman helped the fledgling organization find its footing – and its new home. She served as executive director until 1992, when she retired and was succeeded by Tom Beyersdorf. During Lipcaman’s tenure, the organization settled into its second location, a renovated dairy farm on Platt Road in Ann Arbor. The organization was honoring the wishes of more donors every year; during its first full year, the Transplantation Society of Michigan facilitated 52 transplants from 36 donors. When Lipcaman retired in 1992, those numbers were up to 432 and 162, respectively.

Beyersdorf would serve as executive director for 16 years, and helped develop many of the policies that still guide Gift of Life Michigan today. When he retired in 2008, Gift of Life was poised to move into its current location on Research Park Drive in Ann Arbor. Still, the company continued to grow and soon looked for ways to expand the 50,000-square-foot facility.

Rich Pietroski succeeded Beyersdorf, and became the first to use the CEO title. Pietroski had worked for the organization for 25 years; he joined the company as a donation coordinator in 1983, back when the Transplantation Society of Michigan was still a relatively small operation.

Pietroski, who retired in 2016 and was succeeded by current CEO Dorrie Dils, was a part of the tremendous growth that saw Gift of Life settle into and expand its current Ann Arbor headquarters. The organization operates its own state-of-the-art histocompatability laboratory and 54,000-square-foot surgical suite, which opened in 2016. There is more than 100,000 square feet of office and clinical space on its 6.5-acre site.

The surgical suite helped free up space in hospital ICUs and operating rooms and created efficiencies in transplantation, but the underlying goal has always been to help more people.

“The thought was we’d be able to save more lives,” said Anne Kowalczyk, chief financial officer at Gift of Life. She has worked at the organization for more than 33 years.

We couldn't do it alone

Gift of Life Michigan has partnered with many organizations throughout its 50-year mission to honor life through donation, including Eversight (formerly the Michigan Eye-Bank), the Michigan Secretary of State, the Donate Life Coalition of Michigan and the Detroit chapter of the Minority Organ Tissue Transplant Education Program (MOTTEP).

Founded in 1991 by Dr. Clive O. Callender, MOTTEP seeks to address the shortage of donors in minority communities through education and outreach. Gift of Life Michigan has long partnered with the Detroit chapter on events like the annual LIFE Walk/Run, which honors donors, donor families and recipients and raises awareness about donation. 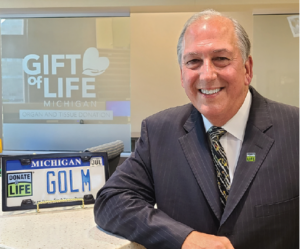 Rich Pietroski, who worked for Gift of Life Michigan for 33 years and served as CEO from 2008-2016, was among the first to order a Gift of Life license plate when former Secretary of State Ruth Johnson made them available in 2012. Formally known as the John J. Gleason Gift of Life Plate in honor of former State Sen. John Gleason, a kidney recipient who sponsored legislation creating it, the plate raises awareness and funds for the Thomas Daley Gift of Life Fund at the Secretary of State, which promotes organ, tissue and eye donation education and outreach. Daley, an organ donor, was the son of former State Rep.  Kevin Daley, who sponsored the bill in the House.

More than $500,000 has been generated through plate sales in the past nine years. 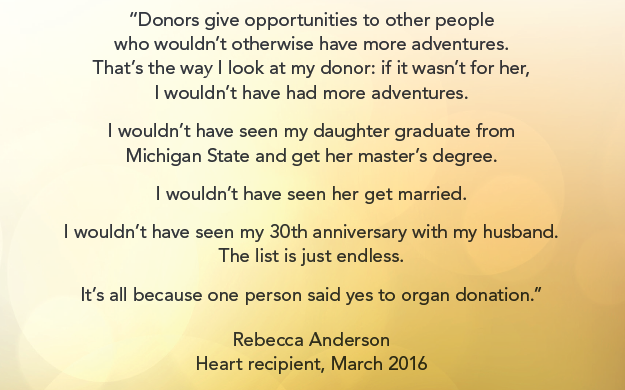 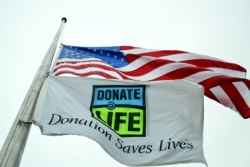 The Gift of Life Foundation is nearly as old as Gift of Life Michigan and has been a constant partner every step of the way.

Formed in 1972 to support Gift of Life’s mission, the Foundation is a non-profit that provides financial assistance to transplant recipients and their families, grants to spark innovations and research to improve technology in the transplantation field, and funding for public and professional education, community outreach and more.

Through the generosity of contributors, the Foundation has awarded nearly $2 million over the past decade.

The Foundation provides funding that:

Most recently, the Gift of Life Foundation has provided money to: expand the “All of Us” youth outreach curriculum; create a permanent donor memorial wall at Ascension Borgess Hospital in Kalamazoo; and support the ongoing “Gift of Sight” campaign at Eversight, which provides financial assistance to patients who would not otherwise be able to afford cornea transplant surgery.

“The Gift of Life Foundation has been a strong supporter of Eversight for many years, showing their dedication to our mission of restoring sight and preventing blindness,” said Alex Teska, director of philanthropy at Eversight.

The Gift of Life Foundation and Gift of Life Michigan work together to honor life through donation and to bring about a day when organ and tissue donation is the cultural norm for all residents in Michigan.

For more information about getting involved or contributing, contact Susan Rink at [email protected] or 734.922.1350 or visit GOLM.org/Foundation.

My, how times have changed over the past half-century. 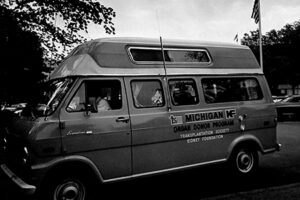 In its early days, Gift of Life Michigan hauled around a clunky perfusion machine in the back of a van — dubbed “Stanley’s Steamer” after founding surgeon Dr. Stanley Dienst — to circulate preservation fluid through donated kidneys.

These days, Gift of Life staff use highly portable perfusion machinery, rely upon technology that can oxygenate and keep organs at body temperature, and employ devices and procedures to improve the viability of all organs and even donated limbs. Gift of Life conducts organ and tissue recovery at its state-of-the-art surgical center.

The constant over the past 50 years is that Gift of Life has been at the forefront of innovation, continually working to solve the equation of time and distance to make transplantation successful. Progress has centered on keeping organs viable longer and expanding the reach of transplant centers to get more organs to more patients who desperately need them. 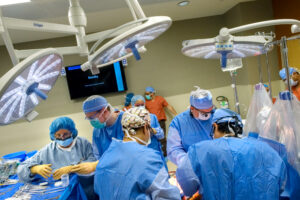 “There’s been so much dedication over the decades to make transplantation work,” said Bruce Nicely, chief clinical officer at Gift of Life.

Nicely said the technical advancements are important, but perhaps even more critical has been the evolution of anti-rejection medications to help recipients live longer and more comfortably.

“What we didn’t quite grasp earlier was the power of the recipient’s body to fight off the new organ,” Nicely said. “It still saw it as a foreign object. The ability to manage rejection was a game-changer.”

It is now possible to transplant organs from donors with hepatitis or who are HIV-positive into patients with those same diseases. Even with the COVID-19 pandemic, which initially slowed donation and transplantation in 2020, Gift of Life and its partners were able to regroup and find ways to get more organs transplanted than ever before. Today, a history of COVID-19 is not even an automatic rule-out for donation.

Each year, Gift of Life Michigan and its hospital and transplant center partners work diligently toward bringing about a day when no one dies waiting for a transplant. 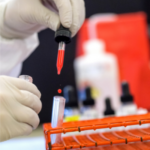 It’s a 24/7 operation at Gift of Life to honor life through donation. Every year, the communication center fields more than 36,000 referral calls, the dedicated lab performs more than 17,000 compatibility tests and more than 9,000 infectious disease tests, and recovery teams facilitate nearly 400 organ donors and more than 1,500 tissue donors.

“The only reason we can make this happen is the people who work here,” Nicely said. “These are compassionate, passionate people who want to make a difference in the world.”