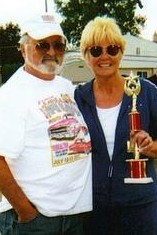 My husband Bob was only 37 when I noticed that he was tired all the time, it was all he could do to go to work. He went in heart failure very fast. When we first heard that he needed a heart, this was in 1987 so heart transplants were still new.

He was in the ICU for 40 days . For the next five months he was in and out of the hospital. He was in the hospital when they called me and said they found him a heart. A 15-year-old girl from Ohio was killed in a car accident, and her family donated her organs.

We had support groups at the hospital but I was still not prepared to grieve for a child who was the same age as my daughter. My daughter finally told me that “mom she did not die to save dad she was going to die anyway, but her family wanted a part of her to stay alive..”.You still can’t help but feel their pain. Bob did pretty good for the next 17 years when we found out that he needed another heart.

What a shock, this time we waited for 17 long months when we got the call that they had a heart. This time the heart came from a 24-year-old man, who died from a head injury. Again a family gave the greatest gift anyone can give.

This time things didn’t go so smooth….from his weaken immune system he got pneumonia and was put in a drug induced coma for 14 days. In 2006 his bowel burst and he had to have surgery to remove 8 inches of bowel and had to have a colostomy for four months.

When they reattached the bowel he got very sick and was in the hospital for 35 days. Now we are faced with another problem, Bob’s kidneys failing. They told us he needed a kidney transplant so our children and his sister were tested. His sister Lynn was the match, so in a couple months she will give her brother one of her kidneys, again he has a guardian angel. He has such a fight in him, maybe to protect the heart he was given.

‘It has to stop because too many people are losing their lives,’ says donor mom…