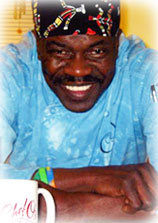 There is always something sensational cooking in Chef O.’s kitchen. He fulfills his mother’s wisdom to always do his best and honors his donor by living a full and productive life.

It’s been more than 22 years since Oliver, better known as Chef O., received a kidney transplant. “I con
sider that date my birthday. I never thought I would need a transplant, I was planning to become a pro tennis player.” Two weeks after winning the 1983 U.S. Tennis Association five-state finals his life drastically changed; he became hospitalized due to kidney failure. “I’ve come to the realization that things happen for a reason, and that my life took a very different course so that I could help people in a very different way.” And different it is! For the past four years, “Chef O.” – now a French gourmet in-home personal chef — was twice voted Best Chef and once second Best Chef in Grand Rapids. He is also a member of the Executive Committee of the transAction Council of the National Kidney Foundation, and was awarded the Foundation’s 2003 Distinguished Service Award. The honors and accolades don’t stop there – they are too numerous to list them all. “I surround myself with people who can hear and see that I am living a full life. That motivates them to donate their organs.” In addition to his Grand Rapids cable cooking program, Chef O. has been teaching Pampered Chef sales staff in-home cooking and sales techniques when demonstrating its products. Now 54, he speaks publicly on behalf of Gift of Life Michigan and has his own Chef O.’s product line, teaches healthy and organic cooking, consults individuals about healthy eating, participates in the U.S. Transplant Olympic Games, plays tennis, considers himself to be a jack of all trades, and most of all he loves his life.