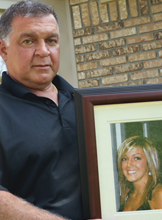 Within a matter of minutes, a headache for Wixom native April Lucas turned into unimaginable tragedy. The popular 23-year-old Central Michigan University graduate student died after suffering a brain aneurysm in late 2011.

April hadn’t signed up to be an organ and tissue donor, so her family was asked to make the decision for her at Beaumont Health System in Royal Oak.

“I wanted to do what she would’ve wanted us to do,” said her dad, Harry Lucas. “I felt like she was telling us this is what she wanted. From that moment on it was about honoring her. My daughter is a hero.”

“My daughter delivered four miracles, and it doesn’t stop there,” Harry said.

Since then, he and his wife, Peggy – April’s stepmom – have helped promote donation in Michigan by volunteering and talking publicly about their tragedy – and the lives April saved.

“I’m now telling the story of every donor through my daughter,” Harry said. “It’s an unconditional gift to a complete stranger. It’s very humbling.”

Harry is sharing his message that those gifts change lives. He’s also talking about something else: Don’t leave your family guessing.