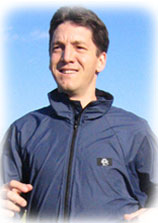 As an adult, Mark’s life was saved because someone gave a hero’s gift, the gift of life. Today, Mark honors his liver donor by keeping fit with a daily run.

In 1998 Mark went into the hospital for what he thought would be routine surgery to remove his gallbladder. During that operation his doctor discovered that Mark’s liver was severely damaged. He needed a transplant and was put on the liver transplant waiting list. Unbeknownst to Mark, he had been harboring a rare liver ailment: Primary Sclerosing Cholangitis. “The most difficult part of the transplant process was the waiting. Three years went by and I just kept waiting and getting sicker. I wasn’t praying for a miracle, just a good liver.” With less than two weeks to live, a miracle did happen. Marks’ life was saved because a local man’s family gave the ultimate gift, the gift of life. “People who knew me then wouldn’t recognize me now. I bounced right back after my surgery and I now know that I was given a second chance.” He honors his anonymous donor family by keeping fit, including running and organizing walks and races. Other miracles continue happening for Mark. After his liver transplant, he married his fiancée, Linda, who stood by him during his illness, and they are expecting their first child.