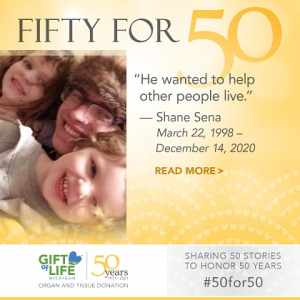 Shane Sena was dedicated to his family and friends and enjoyed working on cars.

“He was a big brother and a little brother. He was loved by his siblings. He doted on them,” said his mother, Marie. “He was very protective of them.”

His love now lives on in the legacy he left for others; Shane became an organ and tissue donor after his life was tragically cut short on Dec. 14, 2020 at the age of 22. His gifts saved five lives.

“He was one of the most unselfish people I’ve ever known in my life,” Marie said. “I just hope that one day I can make people half as proud of me as I am of him. He is my family’s hero.”

Shane enjoyed tinkering on automobiles, dating back to when he was about 12 years old. His interest was sparked by a transparent model of an eight-cylinder motor he put together with his childhood friend, Chance. He also enjoyed fishing and hunting. He also dealt with depression on and off since he was in middle school, according to his mother, after a pair of family tragedies hit him particularly hard.

“You would never have known it to look at him,” Marie said. “He always had a smile on his face. He always wanted to make you happy. He was a people person, a people pleaser — right down to his dying wishes of being a donor. He wanted to help people live.”

Shane struggled with narcotics and had been in jail since October, 2020, when his depression took a turn for the worse. He was in a cell by himself at the end of the hall in the Benzie County Jail with several cells between him and other inmates.

“He needed someone to talk to,” Marie said. “He was alone with his thoughts.”

Shane allegedly attempted suicide in his cell and, although corrections officials attempted life-saving measures and he was transported to the Munson Medical Center, all efforts to revive him failed.

Marie said the family, which includes Shane’s two sons, Asher and Cashus, older sisters Brianna and Chelsea, and younger siblings Hannah, Caitlyn and Keegan, is still reeling with his loss. She hopes to reach out to the people Shane saved to learn more about them and their lives.

“In time, I would love to meet them – or at least speak to them – so I know his heart is beating somewhere,” she said. “I think that would bring me comfort.”

“If he could have reached out to them, he would not be where he’s at now,” she said. “I feel like my son could possibly still be with me, had that been available to him.”

Gift of Life Michigan is celebrating its 50th anniversary this year with 50 stories to honor donors, donor families, recipients and volunteers. For more #50for50 stories, click here.