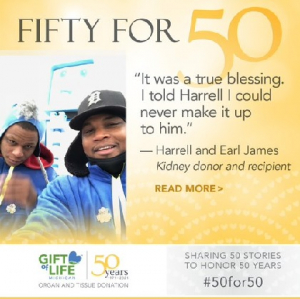 Earl James has some advice for men who are inclined to ignore the typical aches and pains that come with age: ignore them at your peril.

James said he thought he had had the flu and was putting off going to the doctor went he finally decided to go to an urgent care clinic in December of 2016. It turned out he was in end-stage renal failure – the clinic advised him and his wife, Dior, to drive straight to a hospital emergency room.

It was indeed a shock to the system for Earl, who was only 33 at the time. He was placed on dialysis the next day, stunned and still wondering what had happened. He later learned that he had simply missed the warning signs.

Always strong, fit and active, Earl was an athlete who played basketball and football throughout his life. He exercised three times a week and, when he felt an odd pain, slightly blurred vision or experienced some fatigue, he ignored it, thinking he may have just pushed himself a bit too hard during his workouts.

“I never was very big on going to the doctor. I was always under the impression, as a man, that as long as you felt okay you were okay,” said Earl, a Farmington Hills resident. “I found out that I was wrong.”

Earl James’ younger brother, Harrell, volunteered to donate a kidney to him and testing determined they were a good match. The transplant took place in August, 2017, exactly six months after Earl’s diagnosis.

“That was a true, true blessing right there,” Earl said. “I told Harrell I could never make it up to him.”

The intervening six-month period was difficult on the family, however. A truck driver, Earl was too tired after dialysis treatments to continue to work. They sold their home as they downsized their expenses as much as they could. Earl, once a sturdy 220 pounds, dropped down to 170.

Things have turned around since Earl recovered from the surgery. He started his own trucking company, Trio Trucking, LLC., named in honor of his three daughters. They’ve since purchased a new home, too. Earl encourages all his friends to get regular check-ups.

“If I were to have it my way, I would want them to start teaching us about the way our bodies work in school. We should learn this stuff,” he said. “We should be aware of the warning signs – especially African Americans – at a grade school level. This should not be a surprise.”

He advised friends and family to sign up on the Michigan Organ Donor Registry, too. Minority populations are at a higher risk for conditions like obesity, diabetes and hypertension that, left untreated, can lead to organ failure. Yet people in multicultural communities are more reluctant to sign up as organ donors.

“I understand it can be a tough decision to be a donor for a stranger, but if you have a family member and you can be a donor for them? I encourage everyone to do it.” Earl said. “This is amazing. I would do it for anyone if I could without even second-guessing it. If I’ve got two and only need one, why not?”

Earl said the experience also served as a reminder to live life to the fullest. He said he’s grateful for his second chance at life and enjoys spending time with his family.

“If you have a passion, you go for it. Shoot for the moon,” Earl said.  “2017 could’ve been my last year. And, furthermore, none of know when it will be. The only person who knows is God. We have to own our moments and take advantage of the moments we have and be the best we can be with the time we are blessed with. It’s gone in a fraction of a second.”

Gift of Life Michigan is celebrating 50 years with 50 stories of donor, donor families, recipients and volunteers. For more #50for50 stories, click here.