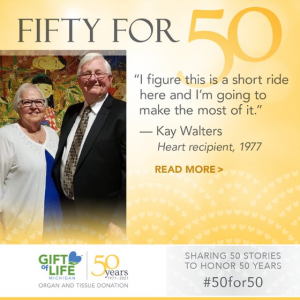 That “nobody” initially included her care team. Walters said she had always been a healthy person until she started feeling unwell in 1989. At first, she didn’t pay much attention – she was a single mother at the time, pursuing a PhD in education, and she chalked it up to stress. After a routine trip to the store left her feeling run down and in tears, her daughter Anica called a family friend, who was a nurse. She advised Kay to go the ER immediately – even though she had a doctor’s appointment later that day. She agreed, and it turned out to be a good decision.

“I don’t remember much of it,” Kay Walters said. “The next thing I knew it was three days later. I had had a major heart attack and cardiac arrest.”

Even worse, her doctors told her she “wasn’t going to make it, long term.” They advised her against going back to work. She was only 38 years old. She left the hospital with those thoughts in her head.

“Then I thought: well, that’s ridiculous. I’ve got this young child by myself. I gotta be here,” said the Lansing resident.

Six months later, she was back at her teaching job. She worked for another five years, then had another cardiac arrest. Even so, she went back to work for another year until a third heart attack brought the devastating news: she needed a heart transplant and, without one, she would not live long.

“When I left the cardiologist, I was just stunned,” she said. “I got in my car and I was just sitting there. I was just frozen. I couldn’t even get the key in the ignition. I kept thinking: a heart transplant? I’m never going to survive this.”

This was in December, 1996, and she didn’t know much about the procedure or her odds of survival. She went to a medical library, found several books, and said she studied for three days. She went on the waiting list and, about six months later, a heart was donated that matched Kay. She later learned the donor was a 19-year-old woman who was about the same age as her daughter at that time.

“I had mixed feelings,” Kay said. “I thought: Am I going to survive? What about the donor family: what’s happened to them?”

The transplant was successful, but doctors cautioned her that it was a gift of time, not a cure. They estimated the heart would last 10 years. Since then, Walters had one bout with rejection and another heart issue, but her heart is still pumping strong. Anica graduated high school, then college and returned for more education after she was laid off due to the Covid-19 pandemic. Kay remarried and she and her husband, Terry, recently celebrated their 25th wedding anniversary.

Kay has made the most of her gift of extra time. She advocates for Gift of Life Michigan, educating the community about the need for people to sign up on the Michigan Organ Donor Registry, and serving as an example of the benefits of donation. Her family has a strong connection to organ and tissue donation. When she was 16, her father talked about the importance of registering as a donor.

“He said: you need to think about this. This is something that everyone can do. Everyone – It doesn’t matter what your gender is, how much money you make, how educated you are – everyone can do this,” Kay said. Her father has since donated his corneas; her brother and brother-in-law both donated their corneas and tissue after they passed, as well.

Walters has also helped Sparrow Hospital start its Cardio Ambassador program and, through fundraisers, helped raise more than $700,000 for other local health causes. An avid golfer, she remains physically active, too.

“I think that’s been a good thing for me,” she said. “I listen to the doctors. I take the medication. I follow the medical protocol, but all the ‘you can’t, you can’t, you can’ts… I kinda don’t pay much attention to that. I figure this is a short ride here and I’m going to make the most of it.”