‘He was a giver all his life’ 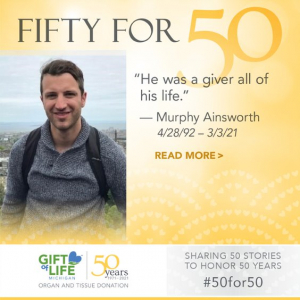 Murphy Ainsworth was always fit, healthy and active – an energetic athlete who is remembered by family and friends as positive and carefree, with an easy-going smile.

“He was really loved by everybody,” said his father, Tom. “He took the best of me and his mother. You really couldn’t have asked for a better kid. I’m proud of everything he did.”

Murphy grew up in the Grand Rapids area, graduating from East Grand Rapids High School and attending Grand Rapids Community College for one year before transferring to Butler University, where he majored in business. He played hockey and basketball though his freshman year, and football and baseball all four years in high school. He was an all-conference and all-area first baseman and pitcher on the East Grand Rapids team that won the 2009 state championship. His father said his love of sports manifested early; he remembers when a 5-year-old Murphy sat on the curb watching older kids playing street hockey. Before Tom knew it, Murphy had convinced them to let him be their goaltender, even though the pads were made for a teenager and hung off him like a tent.

He had since moved to Colorado, where for the past three years he worked at Willis Tower Watson. At the age of 28, he had just been promoted to a director’s position, with 25 people reporting to him.

In early March, Murphy set out for a usual morning jog. He started slowly, as his father said he often did, but made it less than half a mile before he collapsed. Doctors would later discover that his left anterior descending artery was 100 percent blocked. He never regained consciousness. On March 3, 2021 with the love of his life, Callie Peterson, at his side, Murphy gave the gift of life through organ and tissue donation.

Tributes have poured in from friends, family and even people the family had never met. All posted similar sentiments about how positive, generous and kind he was – the kind of person that could make the mundane humorous and who rarely got upset about anything or anyone.

“Murphy was the absolute best person I have ever known. He was someone I looked up to,” wrote his friend, Connor Morgan. “Murphy will be missed by a countless number of people but his legacy will live on in all of us.”

Tom said Murphy had signed up on the Michigan Donor Registry when he applied for his driver’s license. He said they hadn’t discussed it, but he was not surprised to hear that Murphy wanted to donate his organs and tissue.

“That’s the way Murphy was,” he said. “He was a giver all of his life, so it’s fortunate that he’ll be able to live on through so many people.”

A single donor can save up to eight lives and help heal as many as 75 others through donated corneas and tissue. Tom said the family is looking forward to hearing about all the good that came from Murphy’s final act of generosity, but he knows of one family who said they are so grateful for the gift that they’re going to set a place setting for Murphy at all major holidays.

“It’s real touching,” said Tom. “It’s nice to know that in many ways he lives on.”

Gift of Life Michigan is celebrating the 50th anniversary of its founding in 2021 by highlighting stories of past recipients, donors and their families. You can read more #50for50 stories here.