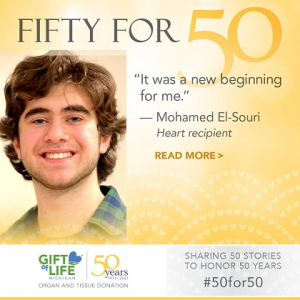 Sometimes, life throws you a curveball.

Mohamed El-Souri knows this better than most people. The 18-year-old Dearborn resident was a healthy, active teen who fell very ill while he was in high school. Doctors initially diagnosed him with pneumonia, but it turned out there was nothing wrong with his lungs – his heart was failing and he needed a new one.

“We were not expecting that at all,” said El-Souri, who is now a freshman at Wayne State University. “You just never know when anything could happen to you.”

El-Souri said he got very sick out of the blue during the winter of 2017. He experienced shortness of breath, fatigue and swelling all over his body. He was having trouble sleeping, too, and was having such a hard time breathing he had to sleep almost in a sitting position.

Born in the U.S., he was living in Lebanon at the time and doctors there initially treated him for pneumonia. The treatments were not helping, however – if anything, he said they made him feel worse. His mother insisted they check his heart and that’s when doctors discovered he had acute myocardiopathy. His heart was enlarged, and not pumping properly.

In the short-term, El-Souri was treated with a Left Ventricular Assist Device (LVAD), an external machine that essentially works as a heart, and a pacemaker. He was also told he would need a new heart and placed on the transplant waiting list.

“When the idea sank in, I thought: ‘That’s so crazy. Am I really going to do that?’” he said. “I was mostly worried about my lifestyle. Was it going to change? Would I be able to do what others are doing? Will I stay like this forever? Will I die?”

He returned to the U.S. but had to live with both devices for nearly six months while waiting for a new heart, mixing frequent medical appointments in with typical high school activities.

El-Souri got the call in March of 2018 that a donor heart had been gifted to him. He has since recovered and is now studying neuroscience at Wayne State University. He said he wants to use his experience to give others a better quality of life.

El-Souri has advocated for organ and tissue donation in the Arab American community and encouraged his peers to sign up on the Michigan Organ Donor Registry. Multicultural populations are more susceptible to conditions like hypertension, diabetes and obesity that can lead to organ failure if left untreated. At the same time, due to a mistrust of the medical system, they can be reluctant to sign up as donors. El-Souri said he tries to overcome those barriers by sharing his story.

“People will not believe you unless you show them an example,” he said. “I want to use myself as an example that you can give someone a second chance at life and they can excel and go way beyond because of that gift you’ve given them.”

Gift of Life Michigan is celebrating its 50th anniversary with 50 stories of donors, donor families, recipients. volunteers and staff. You can find more #50for50 stories here.