‘I just tell people: think of your loved ones.’ 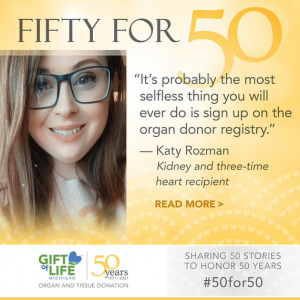 Katy Rozman has a message for young transplant recipients or young people waiting for a new life-saving organ: you are not alone.

“Sometimes all we need is someone to relate to and I don’t always think that’s available – especially for transplant kids,” she said.

She should know. Now 31, Rozman has had heart troubles for as long as she can remember. The Gowan resident has had three heart transplants in her life; the third, in November 2019, also required a donated kidney.

“It’s extremely important for me to share my story so people can understand the importance of organ donation,” she said. “It’s not talked about enough and I want to do everything I can to speak positively about it and how you can change and save lives becoming an organ donor.”

Rozman was born with restrictive cardiomyopathy, but it took years for her to get that diagnosis. She said she was always thin and cold, but her parents and doctors did not think anything was seriously wrong.

“They just thought I was a petite girl,” she said. “I couldn’t run at recess or anything and it seems like that would raise red flags, but my doctor never suspected anything.”

When she was 7 years old, she had a stroke in her parents’ kitchen. Her left side went numb; her face drooped. She slurred her words. Her parents rushed her to the hospital where, after days of testing, doctors discovered her heart condition. After they treated it, she was placed on the transplant waiting list. About two years later, the family got the call: a donor heart had been gifted to her. She was 9 years old.

“I remember that morning clear as day,” she said. “I woke up to my mom and my sister frantically getting ready. I kept saying ‘What’s going on? What’s going on?’ My mom sat me on her lap and she explained to me they had a heart for me and I’d be going in for surgery.”

About a year later, she developed non-Hodgkin’s lymphoma which required six rounds of chemotherapy and surgery to treat. She has fortunately been cancer-free since, but her heart troubles continued. About 10 years later, she started getting sicker due to coronary heart disease in her transplanted heart. She was again placed on the transplant waiting list.

“I knew I was sick, but I was trying to have a little bit of fun and still be a 21-year-old,” Rozman said. “I was also very stubborn at 21. I tried to be tough and be brave and not think about the fact that I was sick.”

Her symptoms worsened on a trip to Las Vegas; they were so severe that when she returned to Michigan she was taken by ambulance from the airport directly to the hospital and told she would have to stay until a new heart was donated. She was there for 21 days. Her second transplant, on Feb. 1, 2011, allowed her to lead a more normal life and accomplish some of her goals.

“Things were great. I was feeling amazing,” Rozman said. “I was working full time; I went to college. I was the only graduate who worked and went to school full-time.”

Sadly, her biggest challenge was yet to come. Her degree was in radiology and she had just started a hospital internship when she fell ill again. This time, it was a strain of the flu that became so severe she landed in the hospital again. She suffered two full cardiac arrests and, while doctors were able to save her life, the attacks damaged both her heart and her kidneys. She lost all her memories.

“I didn’t know who I was, where I was or why I was in the hospital. There is no way I could go back to taking care of patients,” she said. “I still have residual memory issues from it. I had to relearn how to use my right hand.”

She was placed on dialysis for about seven months, until her kidneys healed. Doctors told her, however, that they didn’t think her kidneys would be strong enough to handle the strain of another heart transplant so she was placed on the list for a third time, this time for a heart and kidneys. She was determined that her health would not hold her back, though. She got married, found another full-time job, rebuilt a house.

“We were living our lives. I was still listed for a heart and kidney, but not thinking about it,” she said. “It wasn’t even my top priority because I was doing so well.”

She was listed for longer than she realized, she said. The third call came in September of 2019. More than a year later, her health issues have settled down. She and her husband enjoy camping and hanging out with their seven pets – three dogs and four birds. Rozman said she shares her story every chance she gets to encourage people to sign up on the Organ Donor Registry.

“I bring it up. I share posts. I share my journey,” she said. “I just tell people: think of your loved ones. If they were ever to get sick, or if you were ever to get sick and need an organ, if you’re willing to accept an organ for your health or the health of your family members, you should also be willing to be on that donor list. It’s probably the most selfless thing you will ever do is sign up on the organ donor registry.”

Gift of Life Michigan is celebrating its 50th anniversary in 2021 with 50 stories for 50 years. For more #50for50 stories, click here.