‘I see life in a different way now’ 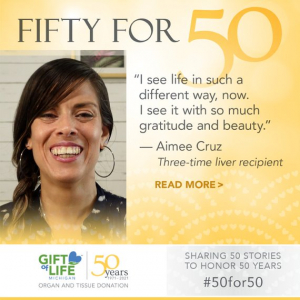 Aimee Cruz would be the first person to tell you she’s lucky to be alive. Originally from Puerto Rico, the Ann Arbor resident has had three liver transplants in her life and is grateful for every day.

“I’ve been very fortunate to still be here after all the things that have happened in my life,” said Cruz, now 44. “Why am I still here when so many other people don’t make it? I ask myself that every day. And I’m thankful every day. I count my blessings every day. I always try to stay positive.”

Her first liver transplant was in 1992 when she was 15 years old. She stayed healthy for a while, but began to get sick again in 1997, shortly after the birth of her daughter, Veronica. In fact, doctors advised her not to go through with the pregnancy, telling her it was too risky. She did not take that advice, and Veronica was born a month early, but healthy.

Aimee’s health continued to deteriorate, however, and she was placed back on the transplant waiting list in 1999. It would be three years before Aimee received the call that a donor liver had been gifted to her. She said her young daughter helped keep her going during that time.

“I was determined. I tried to focus on her and making sure she was okay,” she said. “She’s been such a blessing to me. I don’t know if I would be alive if it wasn’t for her and the strength I got from God-knows-where to be there for her, to be mom to her. She was my pride and joy, my strength, my reason to live. My reason to fight.”

She said the second transplant was a new beginning for her. She remarried, and her husband Shyam helped her raise her daughter. Her health was good until 2015. Then she started to feel sick again and this time her doctors feared the worst. Her liver was failing, again, and so were her kidneys. She was placed on dialysis, almost comatose, and placed in hospice care. Her church gave her the blessing to go in peace and she told family that if a donor liver wasn’t found, they should just let her go. The call came a week later, and she received her third transplant in February, 2016.

Aimee has been hospitalized occasionally since then for surgeries to correct scar tissue from previous procedures, but her health has otherwise been good. She was able to visit Puerto Rico before the Covid-19 pandemic spread and continues to work as a clerk in the Pediatric Cancer Unit at Mott Children’s Hospital.

She has been an advocate for organ and tissue donation, too, helping dispel common myths within the Latino community about the process and alleviating distrust of the medical community. Aimee uses her story to inspire and educate young people and to encourage them to sign up as donors because, as she says, “there are so many ways to save a life.”

She also looks forward to spending more time with her daughter, who is now 24, and said she keeps a positive attitude despite all of the ups and downs she’s gone through in her life.

“Every experience has been different and it’s impacted me in a way where I’ve grown,” Aimee said. “I’ve become more spiritual, more empathetic. I see life in such a different way, now. I see it with so much gratitude and beauty. And I always want to share my story.”

Gift of Life Michigan is celebrating its 50th anniversary by honoring 50 stories for 50 years. To read additional stories from the #50for50 campaign, click here.