A journey of faith 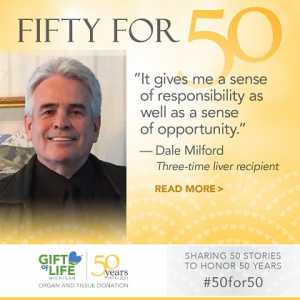 Farmington Hills, MI – Dale Milford has always been a man of strong faith, but he said his transplant journey – or, more accurately, journeys – elevated his calling. After three liver transplants, he said he’s healthier than ever and has dedicated his life to helping others.

“I can’t help but think that God wanted me to tell my story,” said Milford, 65, a Farmington Hills resident. “I feel like I’m on a mission.”

Milford has been a licensed local pastor through the Methodist Church for more than seven years, but has been preaching in Michigan prisons since 2006. Then his health issues got in the way. Diagnosed with Hepatitis C, he spent nearly two weeks in the ICU in 2008 before a matched liver was found; the donor was a 20-year-old African American man whose final act of generosity saved several lives after a brain tumor cut his short. Milford wrote to and became close friends with his mother, Tonja Jones; he met the family a year later.

Complications from the first transplant eventually led to a second, in 2012. Milford said he never really recovered from the second procedure, however, and spent 200 days in the hospital. As the one-year anniversary of his second transplant approached, his Henry Ford Health System doctors told him the prognosis was grim. At one point, they informed him that he had about 10 days to live.

“I had been praying all through this,” Milford said. “When they told me I would not survive 10 days, I had every expectation of dying. I was praying constantly. I had reconciled myself with death. I had accepted death.”

Milford received another miracle. Another matched donor liver was gifted on Good Friday, 2013. He woke up on Easter Sunday, and said the coincidental timing was not lost on him. Since his third transplant, he’s had a few minor health setbacks, but overall he said he’s healthier now than he ever has been.

Now an executive pastor at the Hope United Methodist Church in Southfield, he also continues to be an advocate for social reform. He helped advocate for ‘Raise the Age’ legislation that kept youth younger than 18 years old from being sentenced to state prison. He helped develop a Returning Neighbors Ministry, which helps people released from prison reassimilate into society.

“I feel so privileged to have been allowed this opportunity,” he said. “My transplants have given me a sense of responsibility as well as a sense of opportunity.”

The former owner of a direct marketing firm, he said his journey hasn’t changed his focus, but refined it. He follows the mantra of John Wesley, leader of the Methodist Church: “Do all the good you can, in all the ways you can, to all the souls you can, in every place you can, at all the times you can, with all the zeal you can, as long as ever you can.”

“Before my transplant I devoted my life to seeking success. After the transplant I felt the drive to seek significance. I switched my priorities,” he said. “If it were not for the work of Gift of Life Michigan or the work of Henry Ford getting my third transplant, I would not be able to do this.”