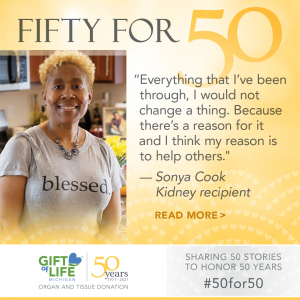 ‘There’s a reason for it, and I think my reason is to help others.’

When a severe headache sent Sonya Cook to the doctor, she hardly expected a life-changing diagnosis.

“I never had headaches before, really,” said the Brownstown resident, now 52. “I had no health problems whatsoever.”

She was in her early 30s at the time and working as a program support assistant with the VA Hospital. She was surprised to learn her symptoms were caused by a previously undiagnosed kidney disease, IGA neuropathy, in which deposits of protein build up in the kidney and frequently lead to renal failure.

She and her care team managed the condition as best they could – she was treated for high blood pressure, anemia and even had some iron transfusions. Two years later, she learned that she was pregnant and doctors advised her that due to her disease, it would be a high-risk pregnancy.

“It was very difficult,” she said. “I couldn’t hold anything down.”

After one particular scare during her fourth month, doctors were so concerned with her health they did not want her to carry the child to term. Sonya insisted, however, and requested she be placed on bed rest until she and the baby were stronger. The doctors agreed but her daughter, Naia, was born just a month later, after only five months. She weighed one pound and one ounce. It was Dec. 30, 2002.

“She was so tiny, I couldn’t even see her with all the tubes,” Cook said. “She was smaller than a can of pop.”

Worse, Sonya’s kidneys shut down after Naia was born. She went for dialysis three times a week and visited Naia in the Neonatal Intensive Care Unit (NICU) while she gained strength. Even then, she said she didn’t think about having a kidney transplant right away, until one of her caregivers advised her to get on the list as soon as possible.

“He said: ‘It’s not like going to the store or going to the car dealership to pick out what you want. This is a process,’” Cook said. 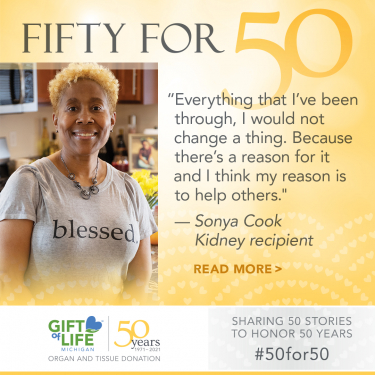 She was on dialysis and the waiting list for three years before the call came that a match had been found. Even then, she had mixed feelings. The kidneys had belonged to a little girl, about the same age as Naia, who had passed away due to complications from the flu.

“I had a very hard time accepting kidneys from a baby that was the same age as my child,” she said. “I couldn’t understand why God would take this child into his arms so that she could save my life.”

Trusting God, however, and realizing she was fortunate to wait a relatively short time for the life-saving organs, she agreed to it. The transplant was a success and she recovered quickly. The thought of another young life cut short weighed on her, however. Her donor family was on her mind.

“The first thing I did once I got home was to thank them and give them my sincere condolences on the loss of their child,” she said.

Gift of Life Michigan Aftercare Services facilitates correspondence between recipients and donor families, but those communications are anonymous until both parties agree to share additional information. Cook eventually met the family of her angel – her name was Mei Lynn, and she had been adopted from China – and remains friends with her mother to this day.

Naia turned 18 in 2020 and is doing well. Sonya has used her second chance at life to advocate for organ and tissue donation, to break down misconceptions and to encourage people to sign up on the Organ Donor Registry. She uses her own experiences and talks about how organ donation saved her life and gave her the opportunity to watch her daughter grow and thrive.

“I know firsthand what some patients may go through, how someone may feel mentally and physically, and I know firsthand that I have been given a testimony and rare ability to connect with other’s through empathy and compassion,” she said. “All I ever heard was ‘no, I’m not giving up my organs. I came here with them, I’m leaving with them,’ or health care workers will let you die if they know you’re a donor. Once I tied my story into it, it helps them understand.

“Everything that I’ve been through – I would not change a thing,” she added. “Because there’s a reason for it –and I think my reason is to help others, to give them my testimony and to help them along the way. That’s what I try to do.”