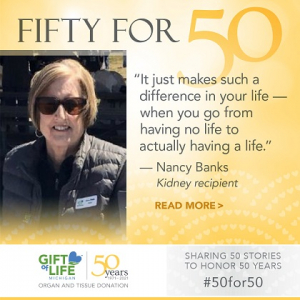 Nancy Banks was just finishing up a dialysis treatment when her phone started to ring.

She didn’t recognize the number and was going to ignore it because the clinic had a strict no-calls policy. A staff member had a feeling about the 800-number, however, and advised her to answer. When she did, she received some of the best news of her life: a donor had generously gifted a kidney and it was a good match for her.

“I just started screaming, everyone started screaming, people were crying,” said Banks, a retired special education teacher. “Dialysis, as hard as it is, is like a little community. Everyone is so excited when someone gets their kidney. People just erupted.”

Banks said she did not ask any of her family members if they wanted to donate a kidney to her, even after years on the waiting list. She was 66 when she received the call and said she was starting to wonder if she was just too old to find a match.

“When you get to be that age, you think you’re going to be way down on the list,” said Banks, who turns 72 this month.

Banks had spent nearly five years on dialysis, but her health issues dated back more than two decades to when she was diagnosed with a blood clotting disorder. Her small intestines were filled with clots, and she had to have all but 17 inches of them removed 26 years ago. Her kidney issues started then and worsened until she needed dialysis in 2009. The three-times-a-week treatments forced her to retire from her teaching job with the Grand Rapids Public School District.

The improvement in her health since her 2014 transplant has not been lost on her friends and family. She encourages them to sign up on the Michigan Organ Donor Registry, offering herself as living proof of the good it can do, and many have taken her advice.

Banks has also tapped into the skills developed during her 18-year teaching career and to advocate for organ and tissue donation at high schools, colleges and at other community events. She said it’s important for people to sign up on the Michigan Organ Donor Registry because of the tremendous good a single donor can do – saving up to eight lives, and helping as many as 75 others through tissue donation – and because of the need for more registered donors. There are about 110,000 people waiting for a new organ in the U.S., including about 2,500 in Michigan.

“It’s so important to be a registered donor,” she said. “I would not be here if somebody had not volunteered to do that.”

Gift of Life Michigan is celebrating its 50th anniversary in 2021 by sharing 50 stories of donors, donor families, recipients and volunteers. You can read more #50for50 stories here.