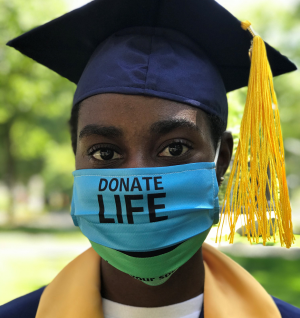 Last year, Acacia Walter-Rooks accomplished something she wasn’t sure she’d be able to do: graduate high school.

Now a freshman at Calvin University, Walter-Rooks had both of her kidneys removed when she was a child and navigated school and dialysis treatments until a kidney transplant saved her life in 2016.

“It was very challenging. I was pretty much out my whole eighth grade year and first semester of freshman year,” she said. “I would go to school, then like a week later I’d get sick and have to go to the hospital. It was pretty challenging to have to navigate between school and social life and hospital life.”

Her health first took a turn for the worse when she returned from a camping trip with her family, feeling extremely tired and bloated. She was 11 years old. Doctors first attributed her condition to drinking some non-purified water.

“My whole family pretty much grew up in the outdoors,” Walter-Rooks said. “My dad is an outdoor recreational professor at Calvin; We did lots of trips – backpacking, skiing and hiking and everything.”

Doctors eventually found out she had she had a rare kidney disease called focal segmental glomerulosclerosis, which scars and damages the kidney’s filtering units and would likely need a kidney transplant within six months.

She was still waiting 30 months later, but determined not to let her condition slow her down. Even when her kidneys operated at only 30 percent, she was active in sports – soccer, volleyball and tennis, along with continued backpacking trips with the family. Dialysis changed that.

When word circulated that her kidneys were failing, friends, family and the community rallied around her. So many people wanted to donate, transplant coordinators capped the list at 30 so they could properly go through them all. The match turned out to be a friend of the family who was also a member of Genesis Methodist Church, where Walter-Rooks and her family were also members.

“It was pretty much a big wake-up call to see everything and see how special organ donors are,” Walter-Rooks said.

There was a brief period of rejection last November, but otherwise she has fully recovered. She is active once again, although not allowed to participate in contact sports. She’s since focused on tennis, playing throughout her final three years at East Grand Rapids, and intends to try out for the team at Calvin next year.

Walter-Rooks is studying business and media production and excited for the future now ahead of her.

“I feel like it’s inspired me in multiple ways to be more thankful in everything,” she said. “Definitely, if I couldn’t find a donor, I’d still be on dialysis three days a week for four hours. I wouldn’t have been able to graduate high school and go to college.”