‘Life is great, but living is greater’ 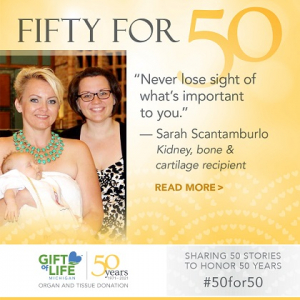 Sarah Ann Scantamburlo has learned to live life to the fullest and make the most of whatever circumstances fate throws her way.

“I feel like so many people wait for tomorrow, what they deem as the perfect opportunity,” said Scantamburlo, a Novi resident. “But how do you know? Once it’s gone, it’s gone. There is no do over.”

Scantamburlo has had to deal with plenty of those circumstances: she has had three kidney transplants – one from her mother, one from her sister and another from a deceased donor – as well as a knee reconstructed with donated bone and tissue.

Her health issues started to manifest in high school, but became really pronounced while she was a freshman at the University of Michigan.

“I was just really slow; I wanted to take naps,” she said. “I wasn’t processing the world around me. We had no idea what it was. I just didn’t feel well.” She even thought about transferring out of school.

The diagnosis was a bit of a shock: she was in kidney failure brough on by Henoch-Schönlein Purpura, an uncommon autoimmune disease that attacks organs.

Scantamburlo was fortunate that she didn’t have to look far or long for a potential donor. Both her mother and father were willing and proved to be good matches. So did her older sister. Her younger sisters were willing, too, but the family decided they were too young. Her mother, Gail, was insistent, and donated a kidney to her daughter in 1998. Although the transplant was successful, Scantamburlo’s body eventually rejected the kidney and she ultimately needed two more transplants, the second from her sister in 2006 and a third from a deceased donor about three years ago.

Despite those health challenges, Scantamburlo finished school and earned a master’s degree in social work and mental health sciences. She worked for five years as a dialysis social worker. Because of her kidney failure, she was constantly fatigued, though, and frequently needed to take naps during the day between seeing patients.

“I had no quality of life. It’s not a quality of life to sit in your car at lunchtime and sleep because you’re that tired,” she said, “or to need to lay down after work. I felt lazy and I didn’t like feeling lazy.”

Things have improved since her third transplant. She is now a psychiatric physician’s assistant at a community mental health agency and will earn her PHD from Wayne State University this fall.

She also advocates for organ and tissue donation and encourages people to sign up on the Michigan Organ Donor Registry. And she’s continually looking for new challenges along the way.

“I like living. I like the experiences. Life is great, but living is greater,” she said. “Never lose sight of what’s important to you. We do this whether we’re healthy or not. We always worry about the next day or tomorrow, or what we’re going to do about this situation. A lot of those things are out of our immediate abilities.

“I like taking on challenges,” she added. “It’s like: look at everything you’ve been through so far. It hasn’t killed you. A new challenge won’t kill you; just do it.”

Gift of Life Michigan is celebrating its 50th anniversary this year with 50 Stories for 50 years. To read more #50for50 stories, click here.