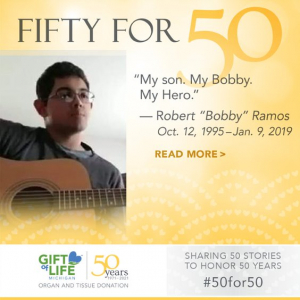 Robert “Bobby” Ramos was a hard worker with a creative side.

“He was always doing something creative,” his father, Robert, said of his son, who died at the age of 23 from a head injury after he fell from a ladder. “If he wasn’t playing his guitar, he was reading, he was writing, he was drawing.”

The creativity manifested early, Robert Ramos said. Bobby enjoyed music before he could even speak – in his car seat, he would move to the rhythm of the classic rock music his father played while they drove around. Robert thought it was something all children did, but when Bobby turned 13 he picked up his first guitar and played every day. He shared his father’s fondness for classic and alternative rock; he grew up a fan of Led Zeppelin and The Smashing Pumpkins, and idolized Jimmy Page. A fan of Stephen King, he also wrote short stories and drew in his sketch book.

Bobby was studying to be a mortician and working part time for a company that put up and removed Christmas lights when he fell from the ladder on Jan. 9, 2019. He became an organ and tissue donor two days later, with an honor walk at St. Joseph Mercy Hospital in Ann Arbor. He was already a registered donor, his parents said.

“We knew what his wishes were and right away we gave the OK,” Robert said.

The experience has changed their family as much as it helped those who received Bobby’s gifts, according to his mother, Mayra Alicea-Ramos. She said it has helped her value her time more and to be open to more experiences.

“His death and his gift of life was life changing for me,” she said. “I have become more present in the moment, I have learned not to let the little things get to me, to enjoy every moment and make as many new memories as I can. I have learned to live life, not just exist.”

They have since written to the recipients of Bobby’s gifts, but only received one response so far. Gift of Life Michigan coordinates correspondence between donor families and recipients, but those communications are anonymous until both parties agree to share more information. The response came from a woman who had chronic knee issues and was unable to run and play with her two daughters. 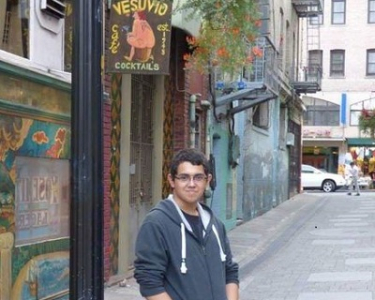 “She stated that thanks to my son’s donation she is active and can do all the things she always wanted to with her girls,” said Mayra Alicea-Ramos, who added that she had not previously considered the kind of good tissue donation could do. “Something that seems so simple is so very powerful.”

The Ramos family Robert, Mayra and Bobby’s younger brother, Caleb, moved to Florida last year. The Milan home where they had lived since Bobby was eight held too many memories, Robert said. They keep a constant reminder of their creative son with them – a quilt, made of two dozen of Bobby’s favorite rock shirts that commemorated some of the concerts he and his father attended throughout Michigan, as well as his sketch books.

Robert said he still hopes to hear back from some of the other recipients of Bobby’s gifts. He hopes to one day hear his son’s heart beat on in somebody else’s chest. In the meantime, he said, the fact that Bobby’s final act of generosity has helped save and heal others has brought them some comfort.