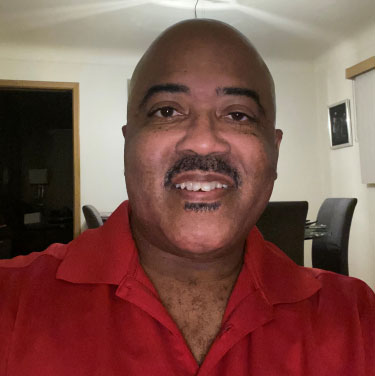 Double-lung recipient celebrates life, helps others on the transplant journey

When Michael Love started to experience shortness of breath, the Southfield resident said he thought it’d be easy to treat.

He was 50 years old at the time and noticed he had been slowing down and was frequently out of breath. His condition came to a head one day when the struggle to get from his truck to his desk caused a co-worker to ask him if he wanted to call an ambulance.

He declined, but visited a doctor soon after. The diagnosis, idiopathic pulmonary fibrosis, came as a shock to him and the recommended treatment was even more startling: his doctors told him he had no other recourse than to get a double-lung transplant.

“It was an eye opener,” said Love, a pipe fitter at General Motors. “I can’t even tell you how I had to process that. It caught me off guard. I thought, ‘You’ve got to be out of your mind.’”

He continued to work after his diagnosis, even though his health was declining. The call came on Nov. 16, 2015: a pair of donor lungs had been found, and Love was scheduled for surgery the next day.

He went home shortly after the double-lung transplant and, at first, things were looking good.

“I felt brand new,” said Love. “If I hadn’t just had my chest completely wide open, I probably would’ve ran home. I hadn’t felt that good in I can’t even tell you when. I don’t even know how long I had been suffering from that lung disease.”

Two years later, his symptoms returned. He was in and out of the hospital, being treated for pneumonia, and his oxygen level was taking a long time to return to normal. Further tests showed that his body was rejecting his new lungs.

“I didn’t get bent out of shape. My viewpoint is: options. I had the option to do it again,” said Love. “You get nervous when you don’t have any options and are pressed up against the wall. I thought: ‘If this is what we have to do, let’s go!’”

His optimism didn’t fade, despite a close call with a second pair of donated lungs. He was preparing for that surgery in 2018 when the surgeon cancelled at the last minute, saying the lungs were not viable.

“I wasn’t upset. I’ve learned that the key is, you have to look at things as the glass being half-full, no matter where you are,” he said. “You could be at your lowest, but there’s always going to be somebody out there that will love to step up into your shoes.”

His next call came 12 weeks later. The initial recovery was more difficult after his second transplant, but he said he’s working his way back up to full strength and taking joy in accomplishing the things he hadn’t been able to do while he was sick. He’s also made it his personal mission to give back, by encouraging people to sign up on the Michigan Organ Donor Registry and helping them along their transplant journey.

He knows he was fortunate to not wait long for either procedure. Minorities tend to spend more time on the waiting list because they are more likely to suffer from conditions like diabetes, heart disease and high blood pressure, which can lead to organ failure. Some are also less likely to sign up to be a donor. More than 100,000 people are waiting for organ transplants in the United States, and nearly 60 percent of them are minorities. In Michigan, 871 of the 2,688 people on the waiting list are African American.

August is National Minority Donor Awareness Month, which aims to highlight the need for minority organ donors and encourage people to lead healthier lives. Love said he hopes to do that and to provide perspective to people who are waiting for a life-saving or life-altering gift.

“I want to help as many people as I possibly can. It’s my personal mission. When you are told that you need a transplant, most other people do not have that experience. They don’t know that many people that have had one that you can have a conversation with,” said Love, now 55 years old. “If you can talk with someone who has had that same transplant – they get it. They understand.

“There’s a side of this that a doctor can’t give you,” he added. “They can heal you, they can tell you how to maintain it, but there are some things they just can’t give you.”