‘A second chance at life is exactly what she got’ 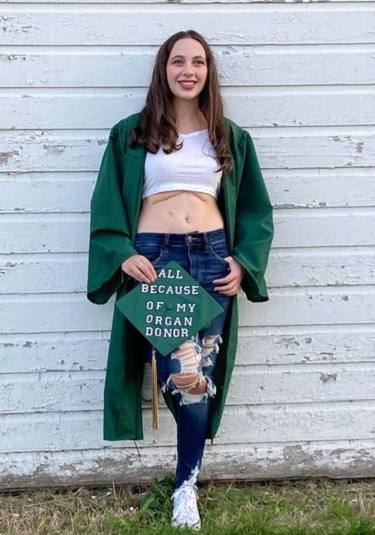 Today, Shannon and Frank Hamet are celebrating their “little miracle.”

Nov. 5 is not Marisa, their 17-year-old daughter’s, birthday but it marks the 16th anniversary of her second chance at life – the day when, as a one-year-old, she received a new liver.

Marisa was born with Biliary Atresia, a rare pediatric liver disease that required surgery to treat when she was only nine weeks old. The procedure went well and she was recovering, but then caught an infection that put her in septic shock and threatened her life.

“She was in respiratory, liver and renal failure when she was 11 weeks old,” her mother said. “She was not expected to survive. She was on a ventilator, but that was not strong enough so they put her on an oscillator. She was in the sickest pod of the NICU. It was horrible.”

Miraculously, she survived. She spent another 28 days in the NICU at Children’s Hospital in Detroit. She was first evaluated for a liver transplant when she was six months old, and, when her health deteriorated further four months later, she was put on the top of the list.

The Hamets got the call about a year later, on Nov. 5: a donor liver was available and it turned out to be a perfect match. Shannon Hamet, a registered donor since she received her driver’s license at 16, said she knew at that point that the worst part was over.

“I was terrified – absolutely terrified – when, at nine weeks old, they told us there was a good possibility she would need a transplant,” she said. “As time went on and she got sicker and sicker and sicker, I could not wait for the transplant. When she was in surgery, it wasn’t a scary day for me at all. We were just very happy. We knew she was going to survive.”

Survive, she did. Shannon said the difference was remarkable. Within a week, Marisa was out of bed and showing more energy than ever before. Her eyes turned white for the first time.

“Before her transplant, she was a very sick little girl. She never felt good. She was constantly on IV medications – even at home – because of her chronic liver infections,” Shannon said. “I think it was six days after her transplant and she was running around in the hospital, running down the hallway.”

There were a few initial brushes with rejection, but Marisa has grown up healthy and active. Now a senior at Flat Rock Community High School, she is on the varsity bowling team and school robotics team. Her post high school plans include pursuing a nursing degree and working in pediatrics.

Shannon said she’s grateful for Gift of Life Michigan and grateful her daughter had a second chance at life.

“We’re very blessed,” she said. “You really learn to appreciate every moment and don’t sweat the small stuff, because we know what bad stuff is.”