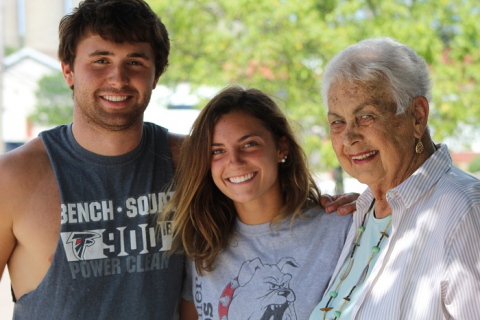 ‘I’m just so grateful for my life, and what I’ve been able to do’

The 77-year-old St. Johns resident has taken on a new project recently – dressing up the outside of the center, which had been overgrown with weeds and suffered from neglect. Her crew consists of two college students, Abby Koneval and Konner Near, who she met through an acquaintance while hunting down supplies for her project. She pays them $15 an hour to dig, weed, lay mulch and plant.

“I try to do what I can to give back,” said Livermore, a retired ultrasound technologist who lives across the street from the center. “I’m so grateful for the life I have.”

She received a second chance at that life about 21 years ago, when a lung transplant saved her. She said she’s thankful for every day.

Livermore said she started to slow down in her early 50s. She traveled often with her late husband, Michael, while he was on business trips for General Motors and said she noticed she got winded earlier and earlier as she was touring cities and museums in Europe.

It took two years to get a proper diagnosis: bronchiolitis obliterans organizing pneumonitis, a rare condition in which the airways in the lungs slowly close. Once she learned she would need a lung transplant to survive, it took another year to be cleared for the procedure and three more on the waiting list.

The call finally came in the middle of the night; the conversation still gives her goosebumps.

“It was about 3:30 a.m. I was lying in bed, trying to sleep and it was getting harder and harder and harder to breathe. I was so tired – just exhausted tired,” Livermore said. “I’m a person of strong faith and I said: ‘You know, Lord, I hate to admit I’m praying for myself, but I am. I need a lung.’ And I said, ‘I think we need it quite soon.’ I felt like I was at the end of my mind, my body was coming to an end.”

An hour later, the phone rang. There was a slight pause and then a woman’s voice: “Karen? Are you ready?”

The lung, she later learned, came from a 19-year-old Black man.

Livermore was not a registered donor at the time and said she didn’t know much about the process. After she recuperated from her transplant, she hosted a catered party to educate the community about the issue and encourage others to sign up to be organ donors. She’s also spoken at events to raise awareness about organ, eye and tissue donation.

“It was such a wonderful gift to me. I’ve done nothing but try and give back,” she said. “I talked to people about it all the time. I think we all have the responsibility to give to somebody the opportunity to have a good, healthy life. 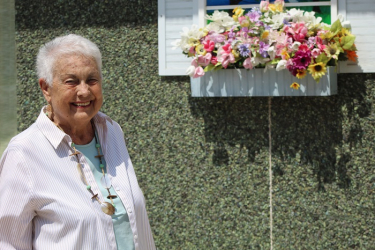 “There are parts of your family that could just be enlarged and expanded upon in ways you don’t even dream possible,” she said, adding that without her transplant, she never would have met her granddaughter, who turns 18 this month. “So don’t cheat yourself or your family. Give them the blessing that you have been given – and pass it on.”

More than two decades later, she’s still living hers. There have been health challenges, but she said she prefers to concentrate on the good times, not the bad times – and making her mark, wherever and however she can.

“I drive. I fish; I do normal things. I’m strong and I take care of myself,” she said. “I’m just so grateful for my life and what I’ve been able to do. Don’t sit around and look at your past. It’s a wonderful life – go and make it.”