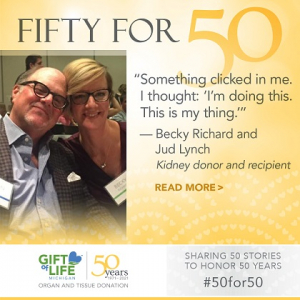 Jud Lynch knew he would need two things: a haircut and a kidney transplant. The 68-year-old Grand Rapids man just didn’t expect to get them both from the same person.

He was diagnosed with IGA nephropathy in his 20s, an autoimmune disease in which antibodies build up in the kidneys and cause scarring. It has no cure.

“It’s really a wait-and-see type thing. There’s really no medicine or anything for it,” said Lynch. “When it gets to a certain point, the only real treatment for it is dialysis or transplant.”

That certain point came about six years ago. Lynch’s symptoms were getting worse and he was forced to go on dialysis. His daughters could not donate and his siblings were not a good match. That’s where Becky Richard, a stylist at Eastside Salon in Grand Rapids, came in. Richard had known Lynch for about 10 years, and had been his regular stylist for about five. She knew he had been having health issues, but did not know how severe they were. When she heard that Lynch was having dialysis treatments, she said she knew just what to do.

“When I heard that he was sick and needed a kidney, something clicked in me. I thought: ‘I’m doing this. This is my thing.’ I ended up being a good match,” said Richard, 49, of Grand Rapids. “I believe it was meant to be, for sure.”

Lynch said he was initially not sure. It was such a personal decision, he said, and he wanted to make sure Richard was certain and committed to the decision. She insisted, even taking pains to watch her diet and live as healthy a lifestyle as possible to take care of the kidney she no longer thought of as hers. Seeing her commitment and dedication, Lynch agreed. The transplant was performed on Jan. 25, 2016 at the Mercy Health Transplant Center in Grand Rapids.

“You feel better almost instantly. Right away I knew the kidney was working,” Lynch said. “When your blood gets clean, you start feeling a lot better in a hurry. It’s really been a change in life; it’s a miracle.”

Richard said she suffered no ill effects from the donation. Her remaining kidney has been strong – even through a battle with breast cancer in 2017. In fact, she said the donation has given her a new purpose, much like she felt after having children.

“Donating a kidney ranks right up there. It has given me such joy and such purpose in my life that I cannot even describe it,” Richard said. “I felt like I was I was carrying his kidney and I had been my whole life and just waiting for this point to hand it off to him. It was never really mine; it was always his and I was holding on to it for him.”

They have remained close. Richard still cuts his hair. She traveled to California to watch Lynch walk his youngest daughter down the aisle when she got married.

“We’re more than just close. We consider her part of the family,” said Lynch. “She’s like another daughter. She’s an angel.”

They have also spoken for the National Kidney Foundation about their experience and continue to advocate for organ and tissue donation, and to encourage people to sign up on the Michigan Organ Donor Registry. Richard said everyone should consider it, because of the good it can do for others.

“If somebody feels like they want to donate, they need to know they’re a special person, just for having that thought,” she said. “They’re very, very special people. To even explore the opportunity is something to be encouraged.”