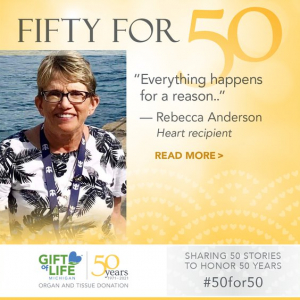 Rebecca Anderson has been able to watch her daughter get married, graduate from Michigan State University and earn a master’s degree. She has traveled to the Mediterranean and celebrated her 30th anniversary with her husband, Rex.

It’s an impressive list, considering she was never expected to see her first birthday. Anderson was born with idiopathic hypertrophic subaortic stenosis (IHSS), a condition that causes thickening of the heart muscle, which severely restricts the blood flow to the vital organ.

“Back then, they didn’t have the technology they have now,” said Anderson, who is 61. “They told my parents I probably wouldn’t make it to see my first birthday. It was that serious.”

Anderson has had two heart surgeries in her life prior to her 2016 heart transplant. As a child, she couldn’t take part in gym class at school, ride a bike or do a lot of typical childhood activities. Her health worsened and came to crisis point in 1999.

“I was just getting really tired. I couldn’t breathe,” she said. “I couldn’t walk more than a few feet before catching my breath.”

To treat her condition, in 2000 Anderson had the first of two septal myectomies, a procedure in which surgeons cut part of muscle away from the heart to help it pump better. Doctors told her then that the muscle would grow back and she would eventually need a new heart. She was 40 years old.

While she was in the hospital for that procedure, there was a man across the hall who was waiting for a heart transplant. Sadly, like too many people in the U.S., he died waiting for a match. As many as 20 people in the nation die each day waiting for a life-saving organ. It left an impression on Rebecca and her daughter, Melissa, who was 8 years old.

“I had gotten close him, and my daughter was upset,” she said. “She said: ‘Mom what can I do?’ I said, ‘You can put yourself on the donor list. That’s what you can do.’ We put her on the list and, when she was old enough, she signed up on her own.”

The myectomy proved successful but, about 12 years later, Rebecca started feeling sick again. She went to the Cleveland Clinic for her second myectomy and this time, 11 grams of fat were cut away from her heart. Her condition improved temporarily, but by 2015 she was placed on the organ transplant waiting list.

Meanwhile, her daughter had graduated from Michigan State and was working on her master’s degree. Melissa was engaged to be married, with a date set for August, 2016. Rebecca was looking forward to being there for both.

“Just like every parent, you want to see your kids do everything they possibly can,” she said.

However, she wasn’t sure she was going to make it. She had bad chest pains, was frequently out of breath and tired constantly. She had to sleep sitting up.

“Nothing was working. My symptoms were just getting worse and worse,” she said.

She had two close calls. The week before Christmas, she was notified that a gifted heart was available. She rushed to the hospital and got all the way to the operating room before surgeons decided the heart would not be viable for her. The second gift came on Feb 1, 2016 – which would have been her father’s birthday – but that match also did not work out.

“You start to wonder if it’s going to happen or not,” she said. “I was thinking this isn’t going to happen. I’m just going to have to live out the rest of my days as God sees and that’s it. I just have to accept it. I was an emotional basketcase.”

They talked about moving up her daughter’s wedding so Rebecca would be able to attend. They were looking into their options when the third call came. This time, on March 8, 2016, everything fell into place and the transplant was successful. Even so, she was not sure if she’d be able to attend her daughter’s wedding. Her doctors were optimistic – but only if she stayed housebound until then. Rebecca said she happily behaved and did not leave the house for 12 weeks.

August came and she and Rex walked Melissa down the aisle in a beautiful outdoor ceremony on Grand Traverse Bay. It was the first time Rebecca had been in public since she had received her gifted heart.

“It was kind of overwhelming. It was a very emotional day,” she said. “There were a lot of tears, but a lot of happy tears.” 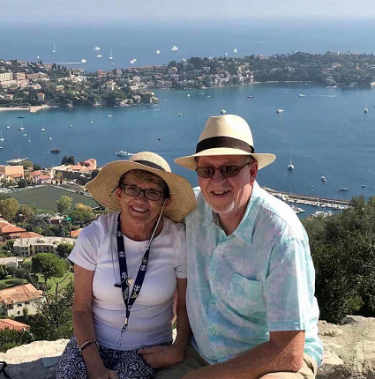 Rebecca has since advocated for organ and tissue donation and encourage people to sign up on the Michigan Organ Donor Registry. She uses her story as an example of the good it can do. She’s on the Donor Registry herself and hopes to be able to donate when it’s time.

“I’m always on my soapbox about donation. It’s so important. I hope that when I leave that I get the privilege of having an Honor Walk,” she said, referring to ceremony many hospitals hold when a donor is being moved to surgery so their organs and tissue can be recovered. “I’m going to donate the organs that I can. I just think it’s an incredible thing.

Gift of Life Michigan is celebrating its 50th aniversary in 2021. For more #50for50 stories, click here.