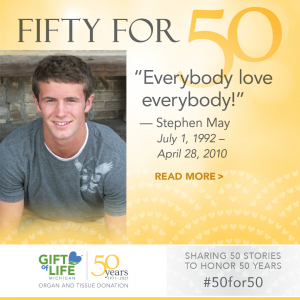 Stephen May had three words that he lived by: Everybody Love Everybody.

He initially took it from the 2008 Will Ferrell movie Semi- Pro, but he fully adopted it into his life at Rockford High School, with the sports teams he played on and in the youth leagues where he served as a referee.

“He lived it. They weren’t just words for him,” said his mother, Gerilyn. “He really did mean it when he would tell all the guys: quit fighting and get along. He would always say ‘ELE.’”

The words would also become part of his legacy. Stephen died from a tragic accident in his home on April 28, 2010, about a month before he was to graduate from Rockford High. He was 17.

A devout Catholic, Gerilyn said the family relied heavily on their faith in the wake of that tragedy. Stephen had attended Catholic school until the sixth grade, and the family was very involved with the Assumption Blessed Virgin Mary church in Belmont.

“We would not have survived that tragedy without our faith,” she said. “Our church was incredibly kind. We just had so many people surrounding us in prayer and compassion. I really feel that God was really working through Stephen to not only help us get through that, but to enlighten us in other ways.”

One of those ways was through tissue donation. A single donor can save up to eight lives through organ donation and help heal as many as 75 more through donated corneas, bone and other tissue. Gerilyn said the family discussed the issue with Stephen – and the church – when he turned 16.

“We talked about it,” Gerilyn said. “When he turned 16 and got his license, he checked the box. This is what he wanted. It’s a wonderful expression of love that Stephen did. It was his last gift to the world.”

Father Peter Vu, a family friend who served at Assumption Blessed Virgin Mary at the time and who consoled them through their time of grief, agreed.

“I think the family made a wonderful gift to keep Stephen’s legacy alive,” Vu said. “His values will continue to live on. People will remember him that way.”

The community remembers him through ELE, too. Family friends purchased a marble bench in his honor; it now overlooks the playground at the Assumption Blessed Virgin Mary Catholic School, inscribed with Stephen’s name and the phrase: ELE: Everybody Love Everybody. The Mays also established a scholarship in his honor. Their first community fundraiser generated $60,000 – enough to keep it going in perpetuity. Each year, a male and female senior who go above and beyond showing kindness for other people are eligible for the ELE Scholarship. The concept has been built into the curriculum and expanded into the community, as well, to recognize people and businesses that show kindness to others.

“I feel like Stephen is still making an impact in this work,” Gerilyn said.

The family has since learned that Stephen’s heart valves provided new life to others and, while they have not reached out to the recipients directly, Gerilyn said it’s enough to know that somewhere, someone is living a better life because of Stephen’s choice.

“That brought us great comfort,” she said. “I think each of us make an impact that we’re not even aware of until we’re gone. He happened to make a huge impact in the short time her was on this earth. It was God’s plan for him, and we know that now.”

To register as an organ and tissue donor, click here.

Gift of Life Michigan is celebrating its 50th anniversary this year. You can read more #50for50 stories here.