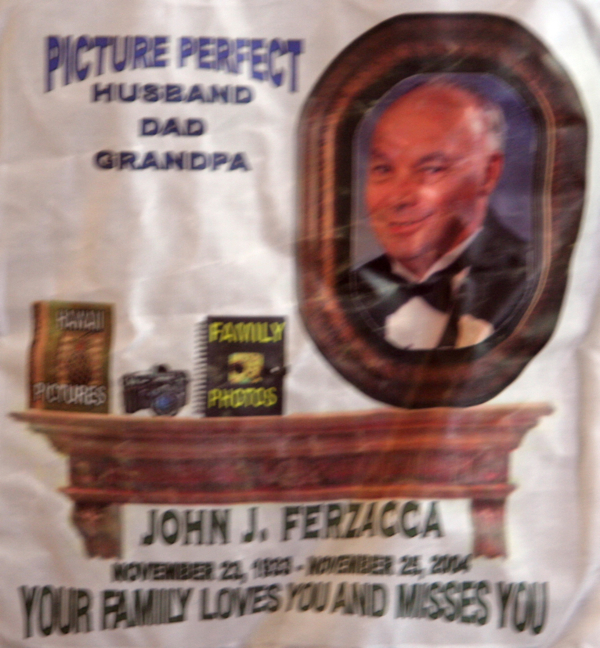 My dad, John J. Fercazza, passed away on Thanksgiving morning November 25, 2004, just two days after his 71st birthday, from a sudden massive heart attack. It took my whole family by surprise and we still have our moments of being in shock that he is really gone. He spent the last thirty years of his life in Almont, Michigan. However, he was born in Rhinelander, Wisconsin, spent his entire youth growing up in Iron Mountain, Michigan, with living in the Detroit suburbs of Southfield and Redford Township in between.

My dad’s career path was a tool designer. He spent thirty years working for National Twist Drill and Tool Company in Rochester, Michigan. He was very active in the UAW, holding such offices as Trustee, Steward, and Chief Steward of Skilled Trades. He was very proud of being a part of the UAW and took his responsibilities very seriously. For years after his retirement my family would hear stories focused around the UAW and his duties. He shined when telling the stories.

My dad was never recognized as a local or national hero, was not of the “Rich and Famous”, did not complete super-human tasks, but none-the-less he was a hero to his family. He never missed conferences at school, attended all the school concerts, sat through induction ceremonies for Girl and Boy Scouts, attended all the sporting events, carted all of us to where ever it was we needed to be, and even spent a few years as President and Vice-President of the PTA. Once we became adults he beamed when talking about his kids in college and what we aspired to be. Then came the marriages and the cherry-on-top, his grandchildren

My dad’s life centered around his family. That is what he lived for and what made him happy. He beamed every time he saw one of us achieve a goal or be recognized for anything. A family joke centered around my dad is that he could always be counted on to get extra copies of the program our name was in, the newspaper article we appeared in, etc. And by extra copies, I mean we could wallpaper with them! He was also the dad you would always, without fail, see with camera in hand. One of my dad’s hobbies was photography. We are very fortunate in that he has provided for us a picture time-line of our lives with all of the photographs. There is not one event that went by without many photographs of each and every special moment. Those photographs were always very special, but we now hold them even closer to our hearts.

Organ donation was never really discussed, one-way the other in my family. Thus, when the nurse at Lapeer Regional Hospital came to us to inquire about organ donation it took us by surprise. Not only were we shocked by his death, we now had a very important decision to make and only had a short time to make that decision as a family. My dad spent most of his life doing for others because that is what made him happy. He often gave of himself or gave up some of his wants/needs in order to do something for someone else. Thus, the decision was very easy for my family. What better way to give of yourself than organ donation. The key to photography is looking through the lens of a camera. When looking through the lens you can see what you will be snapping a picture of. That picture is a moment in time frozen forever. All of those moments combined are what make us who we all are, allows us to see happiness in someone’s eyes and face, and provides a heart print that will stay with us for a lifetime. My dad’s organ donation has now allowed two women the gift of sight. And, it is comforting to know that both of them do not live far from Almont. His gift to them now allows them to look through the lens of a camera, snap a picture, freeze a moment of time, and make a heart print for themselves.

A cliche that fits my dad states, “A picture is worth a thousand words.” However, the gift my dad has given is worth more than a thousand words; it is worth a lifetime of many moments, whether frozen in photography or not, that become part of someone’s life. All of those moments combined are who we are inside. It is comforting to know that something so precious to my dad lives on in someone else.

Notice of my dad’s death was in the Tri-City times and Lapeer County Press, our two local newspapers. Because they are small town newspapers my family was given the opportunity to tell the community about my dad in his obituary. At that time we had not yet been informed as to what organ donations were made and if they were successful. What the community does not know is that even though my dad is gone, a part of him still lives on, a part so special and integral to who my dad was. We know that my dad is our guardian angel. He has a camera in hand and is still taking pictures of us and of his journey. Someday, we will all meet up with him again. We look forwards to dishing up a big bowl of ice cream, his favorite nighttime snack, and sitting down with him while he fills us in on what his journey has entailed.