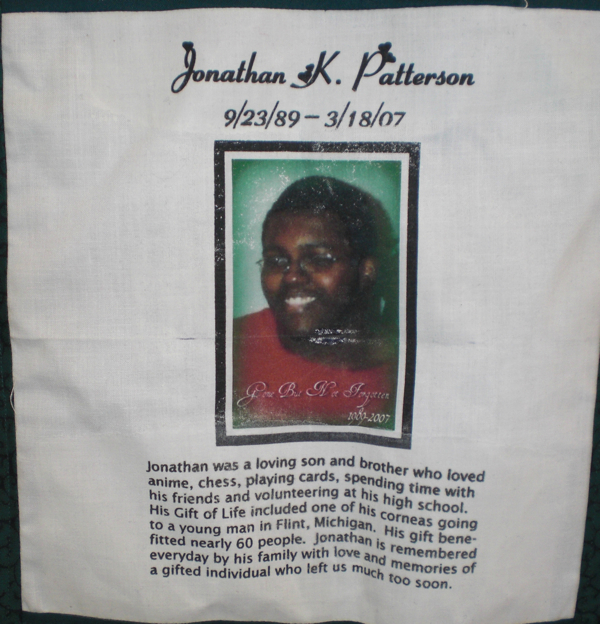 This quilt square has a picture of my son, Jonathan, with this dazzling smile on his face. His smile could light up a room. He had a mild disposition and made friends easily. It was not unusual for 5-6 boys to come over to our home for a “sleepover.” There was very little sleep as the boys would spend the night eating, playing cards, or video games, and talking. These were some of the happiest times of his life. Jonathan loved his friends as he did his family. Jonathan had been accepted at the Art Institute of Fort Lauderdale and was weeks away from graduating. His class ring was delivered two days after his death. I gave it to his younger sister with whom he was very close. His sisters and I were invited to the 2007 Pontiac Northern High School graduation where his cap and gown were presented to his two sisters. the school honored Jonathan with a special part of the program in remembrance. The Thomas M. Cooley Law School honored him with a scholarship in his name that was presented to two graduating seniors. Jonathan had a huge impact on people during his short life. He often told me that he wished he could be a super hero. To Gift of Life recipients, he is exactly that and more. As for me, he was always my super hero.