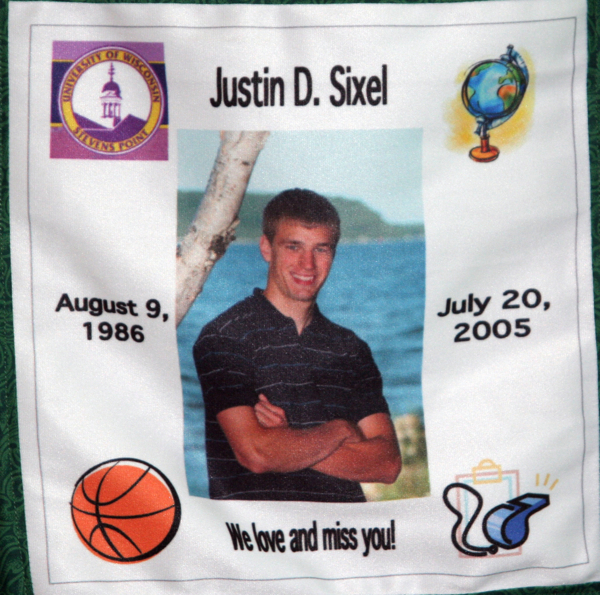 Justin was out 18 year old son. He died in a swimming accident in Florence County, WI. Justin was full of life & loved by so many it was hard to decide what to include. Family and Friends were very important to him. His friends included the very young to the elderly. Justin had a quick sense of humor and a ready smile. He was an inspiration & leader to many, but always ready to help anyone.

The picture is one of many with him smiling. Serious looks were for serious matters only. Justin didn’t look natural without his smile.

The UWSP symbol is the college Justin would have been attending. He had always wanted to be a teacher & after checking out the colleges had decided Stevens Point was for him. He had been accepted & was busy making plans for the fall.

The globe brings history to mind. Justin was planning on being a broad field history teacher, 6th grade through high school. He had really enjoyed the classes he had taken & thought he could have motivating debates with students. He felt history was always in the making and keeping himself and the students interested would not be a problem.

The basketball symbolizes the sport he loved. Although he enjoyed and was good at football and track he did something connected to basketball every day for the last 5 years of his life. Justin would go to school everyday to lift weights, shoot around or play a impromptu game. He was very competitive with others and himself. He felt basketball challenges him to improve himself.

The board and whistle remind us of a coach; Justin’s second love after teaching. He always enjoyed working with kids, giving pointers but also making things fun. Because of a shoulder surgery his senior year he couldn’t play league basketball. This, however, did not stop him from attending every practice & every game. He was voted team captain even though he couldn’t actively play. Justin coached a summer league & enjoyed it tremendously. He made plans to referee grade school basketball games while at Stevens Point. He figured it would keep him involved in the game and also give him a different perspective from playing or coaching. He always tried to look on the positive side.

As the saying at the bottom says “We love & miss him!” Many, many people, kids & adults, have told us what in impact Justin had on their lives & how much he impressed them. He truly will never be forgotten.