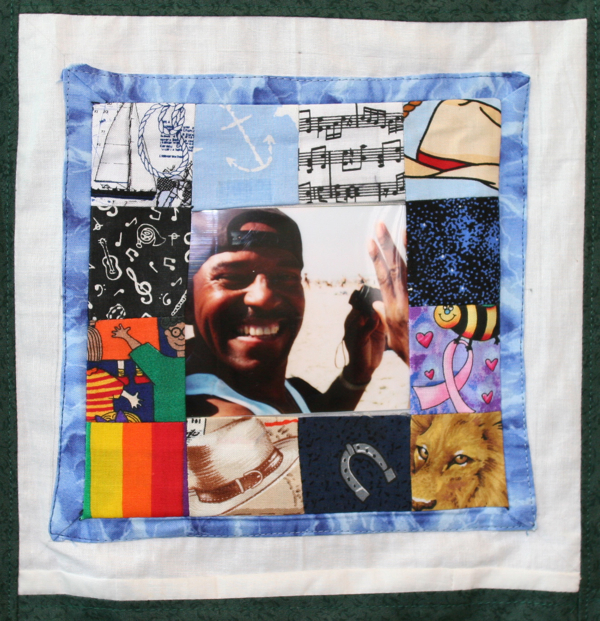 When you see his photo the first thing to catch your eye is his smile. His love for fmaily and the adventure of life kept him smiling. In August of 2001, this photo was taken at Virginia Beach, Virginia. Larry was enjoying family, travel, good times and water. The squares in the patch shows some of the things that were near and dear to Larrys heart. Larry had a collection of ships and nautical memorabilia. He found them interesting. Music was his passion. He played bass guitar and keyboards. Hats were like a part of his body, he always had one on. One of the last hats he wore was a Santa hat for me. Larry worked at a school where all of the students and most of the staff loved him. He enjoyed clowning around, his sense of humor was unforgettable and because of this, he loved clowns and making people laugh. A game of horse shoes was the crowning point for him at a picnic. He had an opportunity to show his nephews his skills last summer. Breast Cancer awareness was something he made sure I was always on top of. I never missed a check-up, he was always there with me. I was truly blessed to marry him. Larry lost his mother to breast cancer. Larry was King of Jungle, a Leo. He carried himself as if he were a king and treated me as his Queen. One of the last books I gave Larry was about the stars and the universe and he loved it very much. He would say, “I wonder what it would be like up there?” I feel know that he knows. This has only been a little bit about Larry.