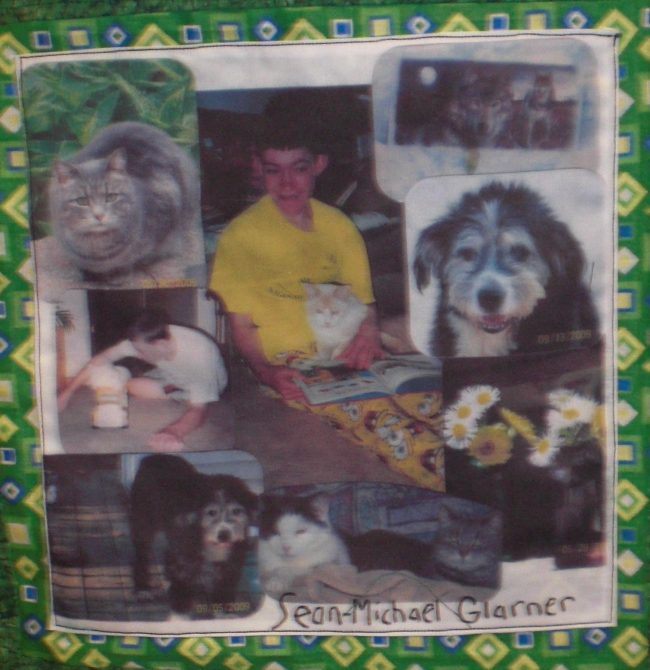 Evidence of Sean’s compassion towards his animal friends shows in the faces of his many pets. These friends included Ben, of ice creams Ben and Jerry’s, Georgie the cat (gray tabby) of Curious George fame and Snugs, a cuddler. Although Sean loved all of his pets and they him, Ben and Georgie were very watchful over Sean and extra special for that. Georgie would always be waiting on Sean’s bed to help tuck him in and the first one at his door to greet him for the day. Ben, as far as Sean was concerned, was a “good police dog” and “a good top dog” (police movies were among Sean’s favorites). Sean attended his animal friends and liked to entertain them. Movies, as was music, was a big part of Sean’s’ daily regime. He fancied just about every genre out there. From an early age, Dad turned Sean and younger brother Nick on the Classic Horror films. Two of Sean’s favorite characters were Dracula and the Werewolf. As hard as I (mom) tried to reason with Sean that werewolves were not real (w/o much success), the full moon was a testament to the werewolf’s existence. IT would always be a highlight of the month (and yes, a howling at the moon occurred). Sean’s love of nature not only included animals, but the beauty of flowers. When Sean was 7 months old, he picked a tiny bouquet of wild asters for Mom (with the help of Dad). As he grew, this was something that he enjoyed immensely. Everyday, when getting off the school bus, early fall and in the spring, Sean would pick flowers along the driveway for his girlfriends the next day and there would always be some for Mom too. He loved doing this so much that I continue this ritual in memory of Sean (can’t imagine not seeing his little vases of flowers on the kitchen window sill). — Denise Glarner