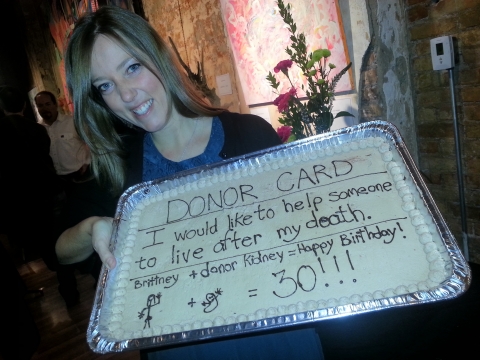 Most organ donors help save lives after their death, but it’s possible to donate organs another way.

What is Living Organ Donation?

People who are living may give a kidney, a part of their liver or a lobe of their lung to someone on the organ transplant waiting list. This usually is someone they know, but the recipient may be a complete stranger. Donating an organ anonymously to the best medical match is often referred to as altruistic living donation.

Living donation dates back to the 1950s. Potential donors are carefully screened for possible risks during surgery and later in life. Those who qualify typically are able to live healthy and long lives. Types of living organ donation include:

Kidneys are the most common organs to be donated by living donors and the most commonly transplanted organ. Most people have two kidneys but typically need only one. This, along with the extreme need for donated kidneys, makes it a popular candidate for living donation.

According to the National Kidney Foundation, a living kidney donor must be in good physical and mental health and be 18 years of age or older. Kidneys from living donors usually function immediately and can be more compatible because of testing of potential donors and/or genetic similarities (if the kidney is from a genetically similar family member). Kidneys from a living donor typically last 15 to 20 years.

Brittney Hoszkiw of Lansing (above) received a kidney from her father, Steve, in 2005 after meningitis caused her kidneys to fail. Family members or friends who don't match their loved one who needs a transplant might be able to participate in a paired kidney exchange, or a kidney transplant chain.

In living liver donation, a portion of the donor’s healthy liver is removed and used to replace the recipient’s diseased liver. Both the remaining and transplanted parts of the liver will grow back to normal size in roughly two months, according to the American Transplant Foundation.

Similar to living kidney donations, living liver donations can be more beneficial than a liver from a deceased donor. Livers from living donors typically last longer and eliminate the waiting period for a transplant, allowing donors to receive a liver before complications arise.

A living lung donor can donate a lobe of their lung to someone in need of a transplant. Although the lung does not regenerate like the liver, both the donated and remaining portions of the lung can stay fully functional.

Surgery is scheduled once the living donor has made an informed and final decision and has been established as a match for the recipient. The recovery process differs among living donors and depends on the specific organ donation taking place.

Who Pays for Living Organ Donation?

The American Transplant Foundation states that the recipient’s Medicare or private health insurance will generally cover certain aspects of the living organ donation. It is illegal for a donor to be paid for donating an organ.

However, the National Organ Transplant Act allows organ recipients to pay for their living donors’ travel and housing in connection with the donation. There are nonprofit organizations that may be able to help with indirect expenses related to donating an organ, such as transportation, lodging and food.

For more information on living organ donation, please go to the Transplant Living website or contact the hospital transplant center working with the friend or loved one you wish to help.