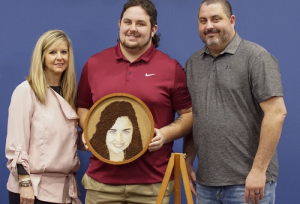 The Donate Life float will once again have a special meaning for many people who take part in or watch the annual Rose Parade in Pasadena, California, on New Year’s Day.

The float, entitled “Light in the Darkness,” is designed to give hope to the thousands of people across the country awaiting a life-saving organ transplant, honor the memories of organ donors and celebrate the lives they’ve saved or improved through their final gift and encourage people to sign up as donors.

This year, Gift of Life Michigan is honoring the life and legacy of Marissa Tudor, a 22-year-old nursing student who donated her organs, tissue and corneas after her life was tragically cut short in 2018. She will be among the 44 donors honored with a floragraph—an organic portrait—on the float.

“We are honored to take part in this celebration of Marissa’s life,” said Dorrie Dils, CEO of Gift of Life Michigan, the state’s organ donation program. “It’s another way we can honor Marissa and the many people she helped through her gift of life and, by extension, honor all donors.”

Marissa died following complications from a routine surgical procedure. Her father, Mark, who is the director of Surgical and Hospital Services at Gift of Life, said the decision to donate was a natural one.

“We’ve talked about organ donation since she’s been a little kid. It’s something that has always been near and dear to our hearts,” he said.

Bill Thompson, a clinical manager at Gift of Life Michigan, said taking part in the Rose Parade also offers an opportunity for donor families to share their stories and show their support. His daughter, Amanda, was honored in the 2012 Rose Parade. She became a donor in 2010, when she was only 20 years old.

“It’s about all the people who have been through this whole tragedy,” Thompson said. “We bring a common group of individuals together that can support each other.”

Gift of Life hosted a floragraph finishing event recently, where Mark, Marissa’s mother Shelly and her brother Tyler added the final touch to her portrait before it was sent to California. You can see video from that event here.

For more information about Marissa and other floragraph honorees on the Donate Life parade float homepage. You can also read more about Marissa’s story here.