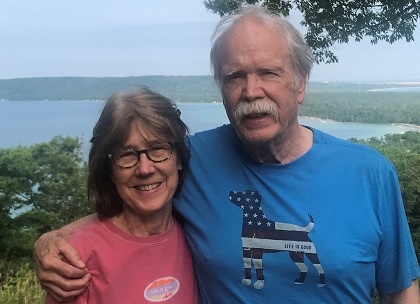 When Michael Collier says he’s in better shape now than he was more than 20 years ago, it’s easy to believe him. Nearly 11 years ago, a heart transplant saved his life and gave him a new perspective on faith and humanity.

“Now I’m 76 and I’m doing better physically than I was back in 1998, when I first developed my symptoms,” said Collier, a retired nephrologist and Birmingham resident. “Physically, I’m doing incredibly well. I look back at my life and the whole experience seems surreal.”

His symptoms were a bit of a surprise. Although he smoked nearly three packs of cigarettes a day when he was younger, he gave up the habit during the 1980s, started exercising and lost about 30 pounds. Collier said he thought he was healthy in 1998, when he was 53 years old and on vacation in Arizona. He hiked in the Grand Canyon, went white-water rafting and he jogged around the city of Flagstaff. Then things started to go downhill.

“I thought I was in great shape and everything was fine,” he said. “When I got back home, at the very end of my vacation, my legs were starting to swell and I didn’t have much energy. I was a little short of breath when I exercised.”

Back at work, he was having a hard time breathing when he walked up a flight of stairs. He would visit a nursing station, and not be able to stand and talk at the same time. Concerned because of a history of heart trouble in his family – his mother and father had died from it 24 hours after first experiencing symptoms, she at 59 and he at 65 – he decided to get checked out. Subsequent tests showed his heart was enlarged, he had fluid in his lungs, and none of his coronary arteries were functioning properly. His condition was so dire he was transferred to Henry Ford Hospital and placed on the emergency heart transplant list.

Medication treated his condition, however. He was removed from the emergency transplant list and went back to work, but still couldn’t exercise the way he had previously. His doctors told him he would probably need a heart transplant or a pump within a year.

Even so, he was doing well for several years after that. But his heart condition continued to get worse. He required a pacemaker in 2004 and, in 2008, a second one. He spent those years on and off the heart transplant list and, in 2009, he was moved up to the top of the list. He was in the hospital for a week, his kidneys started to fail, and fluid was building up in his lungs. His doctors told him he would die within 72 hours if he did not get a heart pump. He agreed and was given a Left Ventricular Assist Device (LVAD).

His condition improved and, because of his age, he thought he would no longer be a candidate for a transplant.

“I gained back energy; I could walk two miles and get up and down the stairs. I was pretty much functional,” Collier said. “I just figured I’d end up with the pump for the rest of my life. I had that in my mind. I thought I’d never be transplanted.”

“I remember waking up in the hospital and my whole family was there around the bed. My son took a video of me waking up,” he said. “It was just a glorious experience. I thought: my gosh, I made it through the surgery, and I’m alive!”

Collier hasn’t been hospitalized since. Six weeks later, he was out snowshoeing. He started jogging again and has finished three 5K runs. He learned about his donor, a 23-year-old man named Joey, whose generous gifts saved five lives. Collier said he also reexamined his faith and was baptized in 2018.

“I wake up every morning and I can hear my heart beating –  Joey’s heart – and I thank God: I have another day on this earth. If it wasn’t for my donor, Joey, his family and the grace of God, I wouldn’t even be here right now, to have celebrated 51 years of marriage, walked my daughter down the aisle at her wedding and have enjoyed now having seven wonderful grandchildren. It has led to the return of my faith, to a much stronger faith than I ever had at any time of my life. It’s given me a new perspective on how to treat people. Before I got sick, I took everything for granted. I think it’s totally wrong and I work on that on a daily basis now.”