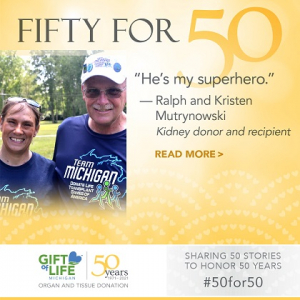 Fathers and daughters often share a unique bond, but for Ralph and Kristen Mutrynowski, that connection is even stronger.

Ralph, now 70 and a Rochester Hills resident, donated a kidney to his daughter in 2014. She learned about her kidney issues during a routine trip to her OB/GYN while she was pregnant. Kristen had been on dialysis for about 18 months and, while several family members stepped up to be tested, Ralph proved to be the best match. He said he never questioned the decision.

“As soon as I learned I was a match, I said: ‘Okay, when can we do this?’” he said. “Why wouldn’t a father do everything he could for his daughter?”

Kristen said she sees it as more than that, and says she and her father have a special bond now. “I always consider him my superhero,” she said.

Unfortunately, she now needs another hero. About three years ago, her body started to reject the new kidney, putting her back on dialysis. With dialysis treatments three times a week, she said life is difficult. She works as a part-time substitute teacher when she can. She still hasn’t had a clear diagnosis of what caused her kidneys to fail to begin with, although doctors suspect it is a rare auto-immune disease that causes blood clots that attack the organs.

Kristen is not alone in her wait. About 110,000 people in the U.S. are waiting for a life-saving organ, including about 2,500 here in Michigan. About 2,050 of the Michigan patients waiting are in need of a new kidney. She and her father encourage everyone to sign up as donors because of the good it can do. A single donor can save up to 8 lives and help as many as 75 others through donated tissue.

“I think registering as a donor is something everybody should do,” said Ralph. “I had no effect whatsoever from donating; I wouldn’t even know the difference.”

With support from her family, friends and colleagues, Kristen said she willing be teaching summer school this year in between her dialysis appointments – and hoping another matched kidney is donated.

“You just have to be patient and live with it as best you can,” she said. “Fortunately I’ve got a strong support group. My friends, my colleagues – even the other patients at the clinic – they have all become an extended family. I wouldn’t be able to do it without them.”