Joseph Reaume died at 41 in 2020. Smith, along with Reaume’s three adult sons, agreed to authorize organ donation since he was not already registered as a donor, but said the decision was an easy one to make.

“I thought about what a giving person he was,” said Smith, of Pullman, about 15 miles northeast of South Haven. “I just felt like it’s what he would have wanted to do.”

His gifts saved four lives, including Sharon Culbreath, a 51-year-old resident of Elkhart, Indiana, who received his heart. The two women met for the first time in October, after sharing correspondence, texts and phone calls over the summer. Smith said seeing Culbreath and listening to her son’s heart was an amazing and healing experience.

“When you lose a child, it stays with you for the rest of your life,” she said. “This has helped me to move forward and deal with it, but it’s still very hard.”

She said her son was always willing to help others. He had overcome some mental health challenges in his life and started to travel shortly before his death, visiting places such as Las Vegas and Jamaica. He was in Florida when he passed, and Smith flew down to be by his side.

Culbreath said she had been battling a heart condition for 20 years. Her health worsened until, in early 2020 and recently married, her chest pain became so bad she had difficulty breathing. Doctors said her heart was pumping at only 5% capacity. She was in the hospital again in October when she and her doctors learned that she was a match for a donor’s heart.

“Organ donation saves lives,” Culbreath said. “I’m a miracle standing here. I have a second chance and I’m going to do the best I can. I’m going to take care of this heart.”

Smith and Culbreath started corresponding about a year later and set up the meeting in October. When the two families met, Smith said it was almost like a reunion.

“It’s like I have a new family now,” she said. “If I could have picked someone to get this heart, I could not have picked a better person.” 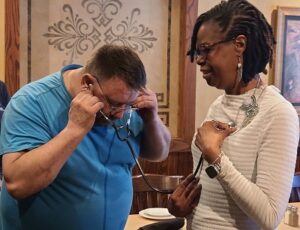 More than 100,000 patients are waiting for an organ transplant in the U.S., including nearly 2,400 here in Michigan. Culbreath said she tells those waiting to be strong and not give up hope, and those who are not registered she encourages to sign up as an organ and tissue donor.

“You will not need your organs when you are gone,” she said. “Why not give them to someone so they can live on?”

Smith said she knows she made the right decision and thinks her son would agree.

“He would say: ‘I’m so happy you did this. You did the right thing. And thank you.’”

To sign up on the Michigan Organ Donor Registry, visit golm.org.