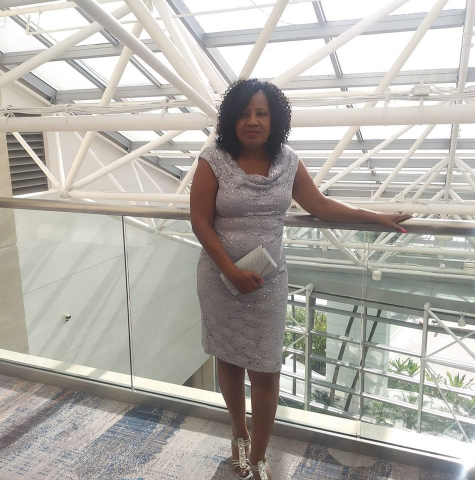 Rekenna Stanford was a registered organ donor long before she needed a new kidney.

“I never had any misgivings about it,” she said. “If someone could use them after I was gone, have at it. If they could save a life, have at it. I’m not going to need them.”

Still, Stanford, 56, of Grand Rapids, never expected that she would be the one who needed a new organ. A behavioral therapist who works with Autistic children and volunteers with youth ministry at her church, she led an active lifestyle, traveling as often as she could.

Diabetes and high blood pressure took their toll, she said, and she got so sick she had to be hospitalized. While in the hospital, she coded and doctors had to revive her. While she was recovering, she learned she would need a new kidney and require dialysis until one was available.

“I thought my life was over,” she said. “I couldn’t fathom how I was going to do anything – how I would go to work, how I would travel, how I would live a normal life.”

Stanford was on the waiting list for one year and nine months before the call came that a potential match had been found. As difficult as the wait was, she said she felt blessed and overwhelmed because she knew many people waited much longer than she did. She decided to take her story to churches and other organizations to promote the idea of organ donation within the African American community, to encourage people to sign up to the Donor Registry and provide more hope for the thousands on the waiting list.

Her story is not that uncommon among minority groups. Due to high rates of diabetes, high blood pressure and heart disease, African Americans are as much as three times more likely to develop kidney failure than other ethnic groups. They represent about 13 percent of the population in America, but more than 35 percent of all patients receiving dialysis. It’s estimated that more than 4.9 million African Americans are living with either diagnosed or undiagnosed diabetes, too.

In Michigan, about 2,228 people are on the waiting list to receive a new kidney. Of those, about 35 percent are African American; in fact, all minorities combined make up more than 1,000 of the names on the list. They represent only about 20 percent of the 5.2 million registered organ donors in the state.

“We’re more affected than anybody, and yet we tend to donate the least,” she said.

Despite the statistics, some minority groups are reluctant to sign up. Common misconceptions, like health care workers will not try as hard to save organ donors as they will non-donors, as well as a general distrust of the medical community make them wary of adding their names to the Donor Registry.

“It’s a tough group to reach,” said Stanford, a Gift of Life Michigan volunteer who frequently shares her story. “I thought it was going to be a piece of cake, but we have a lot of concerns about organ donation. There’s so much mistrust. It’s hard to talk them out of it.”

Despite the challenge, Stanford said she’s happy to do her part to educate the public and share her story. Looking back, she said, she realizes her transplant journey was a blessing in disguise.

About Gift of Life Michigan
Gift of Life Michigan is a federally designated organ procurement organization that serves the state of Michigan as the intermediary between donors, their families and hospital staff. In collaboration with Eversight, Gift of Life provides all services necessary for organ, eye and tissue donation. For more information, or to sign up on the Donor Registry, visit www.golm.org or call 866.500.5801.