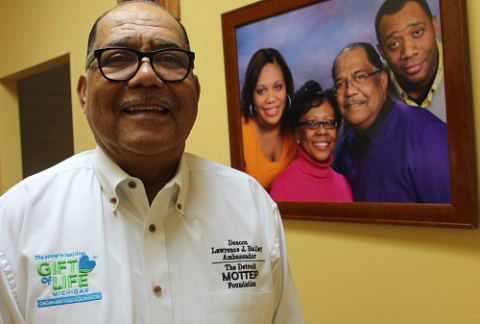 In many ways, Deacon Lawrence J. Bailey considers his donated kidney a blessing.

Bailey, 65, a Canton resident, received a donated kidney in 2013 and has since dedicated himself to spreading that blessing by educating the African American community about the need for organ donors and dispelling the most common misconceptions about donation.

“I didn’t really find my purpose in life until after my transplant. After my transplant, I was thrust into an arena to educate people,” he said. “I realized, really, what I was created for. The reason I know that is because of the joy I get out of doing what I do now. I get joy in explaining to people why it’s important to be an organ donor. That’s why I give it my all.”

Bailey is an Air Force veteran who retired after 31 years with the Marathon Oil Company. He’s served in his church, the Greater Seth Church of God in Christ in Farmington Hills, as a deacon trainer, usher trainer and church administrator. He became concerned with his kidneys more than a decade ago, when he began feeling very fatigued and lost his appetite – and a lot of weight. He knew diabetes ran in his family, so he went to get checked out. His doctor told him his kidneys would fail within five years.

“He was pretty accurate,” Bailey said. “I stretched it out a bit – I started to exercise and changed what I ate – but it was too little, too late.”

Seven years later, he started dialysis and was placed on the waiting list for a new kidney. He was on the list for about seven years before he got the call that a potential match had been found.

In Michigan, about 2,228 people are on the waiting list to receive a new kidney. Of those, about 35 percent are African American; in fact, all minorities combined make up more than 1,000 of the names on the list.

Bailey’s advocacy started In 2014, when he was one of four Detroit-area clergymen appointed to launch the Angels for Life program through Gift of Life Michigan’s Minority Organ Tissue Transplant Education Program (MOTTEP).

“It really did what it was planned to do, which was to increase the number of African American organ donors. The numbers in the state of Michigan went up,” he said. “I just have to believe it was because of education that minorities started to sign up.”

He has since frequently volunteered with Gift of Life Michigan and MOTTEP, speaking at church and other community events as well as through the media through the Let’s Talk campaign. He’s earned a Shining Star Award from the Secretary of State for his public outreach efforts, too. It’s not always an easy conversation to start, he said.

“Organ donation is a hard sell for some people. A lot of them, right off the bat, say: ‘Oh no. I’m not giving up my organs; they’re going to take my organs.’ You hear a lot of things that are not fact,” Bailey said. “You have to take the time to educate people. It’s a good feeling when you talk to people and you explain to them why it’s important to be organ donors and then, two years later, they come back and tell you they signed up because of what you said.”

Educating the community and encouraging people to sign up on the Donor Registry is also another way to honor the people who donate their organs, which he said was an act of great love and compassion.

“To me, receiving my organ transplant was the greatest thing in the world – until I was humbled to the fact that it really was not about me, it was about the donor,” he said. “I live today because of the gift that someone gave me. There’s no greater love than when a man or a woman gives of themselves so another can live. That’s why I celebrate being a recipient, but I celebrate the donor more.”

About Gift of Life Michigan
Gift of Life Michigan is a federally designated organ procurement organization that serves the state of Michigan as the intermediary between donors, their families and hospital staff. In collaboration with Eversight, Gift of Life provides all services necessary for organ, eye and tissue donation. For more information, or to sign up on the Donor Registry, visit www.golm.org or call 866.500.5801. For information about minority outreach, visit www.detroitmottepfoundation.org