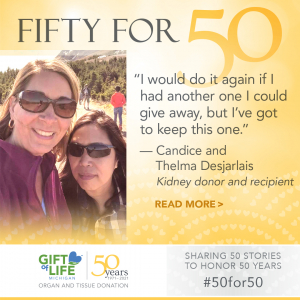 Candice Desjarlais remembers the exact moment she decided to donate a kidney to her sister-in-law, Thelma.

Thelma had just finished a five-and-a-half hour dialysis treatment, with Candice sitting with her to keep her company. Candice said she was moved by the overall somber atmosphere in the clinic and the varying ages of the patients there. The decision was so spontaneous, Candice said she even surprised herself.

“We were walking out of the clinic and I had my arm around her and – I did not even think this, but it came out of my mouth – I said: ‘You can have one of my kidneys.’ It wasn’t even a thought,” said Candice, now 50 and a Milford resident. “’I have two and I’m healthy. I can share one of them with you.’ Why wouldn’t I?”

It had been quite a journey to get to that point. Thelma was born and raised in the Philippines and had been a long-time pen pal with Doug, who was the brother of Candice’s husband, Tom. After a year and a half of corresponding, Doug decided to fly down to the Philippines to meet Thelma. They married during that trip. When she moved to the United States in the 1990s, Thelma learned that her kidneys were failing as a result of an untreated urinary tract infection from her youth. Doctors told her then that she would most likely need a new kidney within 10 years.

Sure enough, 10 years later, Thelma’s kidneys had deteriorated to the point where she required regular dialysis treatments. She and Doug were living in Alaska at the time, but still wanted to come to Michigan to visit Candice and Tom. Candice found a clinic near their home, arranged dialysis appointments during the visit and offered to sit with her sister-in-law during treatments, too.

“Let me tell you, that was the worst experience: just to sit there and see the different ages of the people in the room, people were throwing up, people were sleeping,” Candice said. “It was just sad to see that this was how people had to live. It’s horrible.”

At first, Thelma declined Candice’s generous offer to donate one of her kidneys. After about a year, however, as her numbers continued to decline, her doctors suggested Thelma start asking family or friends if they would consider donating a kidney. Thelma ultimately relented and accepted Candice’s offer.

At first, Candice said she was surprised to find they were a match because they were so physically different – Thelma, a native of the Philippines, is only about 4’ 10” tall, while Candice is about 5’ 8”. Candice’s O+ blood type made her a good match, however.

Still, she had some caveats. A Rick Springfield fan, Candice requested that Thelma listen to his music occasionally, have a glass of wine once a month and, 10 years after the transplant, they would climb a mountain together. After she agreed, the procedure was scheduled and the pair were wheeled into the operating room while “Jessie’s Girl” played over the speakers. That was 13 years ago.

Thelma has since kept up her end of the bargain. She and Candice climbed to the top of Alaska’s Flattop Mountain three years ago, encouraged by other hikers along the way and cheered by a crowd when they reached the summit.

“I told them she has my kidney and this was part of our deal,” Candice said. “They stood up there and cheered for her when we got there. It was kind of cool.”

Since her transplant, Thelma has focused on working and vocational training. She started her own healthcare business, coordinating care for people who are ill.

“I really think organ donation is the ultimate love you can give to people, to give their life back,” she said “For me, donors are the ultimate hero.”

Candice has since volunteered for Gift of Life Michigan, spreading the word about the good organ and tissue donation can do, and encouraging people to sign up on the Michigan Organ Donor Registry.

She said she has no regrets about the spontaneous decision she made 13 years ago.

“There are so many people you can help,” said Candice, who has been a registered donor since she turned 16. “I would do it again if I had another kidney I could give away – but I’ve got to keep this one.”

Gift of Life Michigan is celebrating its 50th anniversary in 2021 by sharing 50 stories of donors, donor families, recipients and volunteers. You can read more #50for50 stories here.